Featured in this Story of Awesome: Topstitch Makers

Topstitch Makers is a paid membership that connects garment sewers with courses, resources, and live sewalongs.

The Spark: With COVID looming in the near distance, Leigh started thinking about how to bring a new spark to her business and go the distance online.

Even before COVID hit, Leigh Metcalf was looking for ways to add some zhuzh to her business.

She dreamed about broadening her reach by adding a digital component to her Atlanta-based fabric and sewing studio, Topstitch. But when it came to finding a platform to host online courses, everything Leigh found was lacking. “I was really struggling to find something that was more than just flat and static,” she says. “Everything I came across felt really boring.”

But soon, inspiration came knocking. While listening to “Tribes,” a book by entrepreneur Seth Godin, Leigh found herself relating more and more to the concept of community.

“One thing he talks about is how you can bring your community together in a dedicated space, where they can engage with each other. And that was exactly what I had been looking for: the tool to take these courses from being a static thing to being a dynamic thing.”

Around the same time, Leigh’s husband had a taste of his own inspiration. After listening to a talk by Adriene Mishler, known for her work around Yoga by Adriene, he suggested that Leigh listen too. In the talk, Adriene brought up a platform called Mighty Networks—where she hosts her own community, FWFG Kula—crediting it as a place where members can engage with each other in a deeper, more authentic way.

Leigh’s interest was piqued. And because this was last February, when things with COVID were starting to kick-off, it felt like it couldn’t have come at a better time.

“I was starting to feel really stressed about my shop because the majority of our sales were in-person classes,” she says. “And so I kept thinking, ‘I’ve got to do something, I’ve got to get these classes online and come up with some way to sustain through what is probably going to be pretty bad for in-person, experience-based retail.”

Thankfully, learning about Mighty Networks got Leigh inspired in a whole new way. “My things were percolating,” she says, laughing. “Finding Mighty Networks, it really felt like love at first sight. And I knew it was going to work for me, you know what I mean?”

Once Leigh found Mighty Networks, her next step was figuring out what, exactly, membership was going to look like inside her new venture, Topstitch Makers. “I actually wasn’t sure what we were going to be doing in there,” Leigh says. “For about four or five weeks, I felt really stumped about what to do.”

Originally, she had considered doing a series of in-person events. “I had envisioned doing something alongside the annual Sewing and Quilt Expo or one of Atlanta’s craft fairs,” she says. “But with COVID swirling in the background, I was like, ‘Nobody’s going to any of this.’”

Eventually, she came up with a compromise: Instead of loading her membership up with tons and tons of courses or hosting live events, she would diversify her content. That way, she could be selective about the courses she was including, add new courses along the way, and host live virtual events within the Topstitch Makers community.

“I just want people to feel like there’s something exciting happening right now. And that’s what we’ve been able to do. ”

Today, Leigh’s Mighty Network, Topstitch Makers, is home to over 900 garment sewers and counting. Access to the community is priced at $4.99 per month, and once in, members have the option to scale up with a variety of premium groups and courses. The latter includes pre-recorded how-tos like Beginner Essentials, priced at $19.99, and live sewing intensives like the Knits Activewear Wardrobe Series, priced at $399.99. 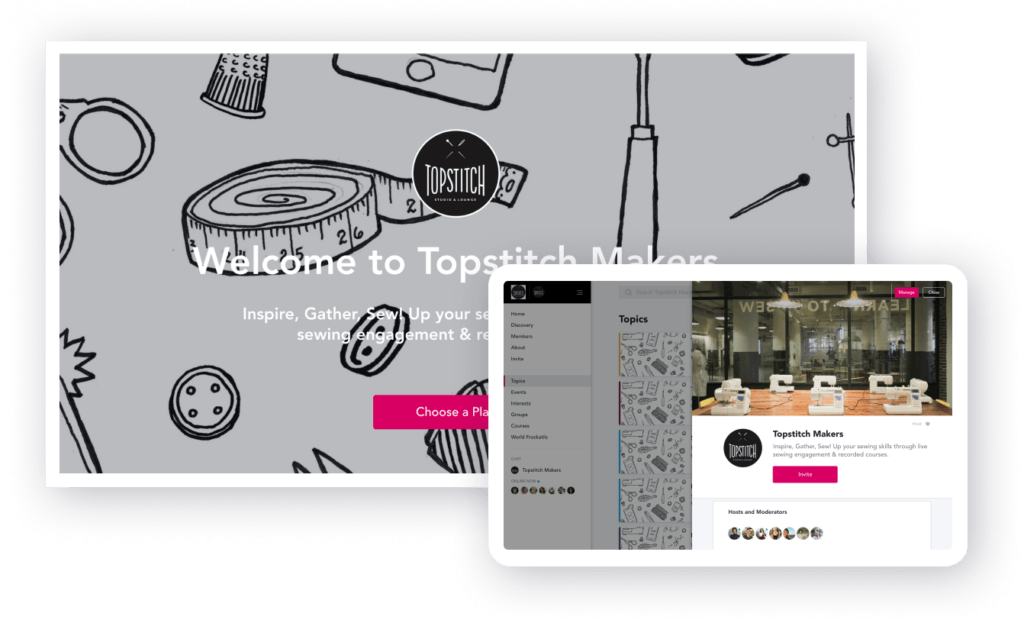 Topstitch Makers’ virtual events are aplenty too, with Leigh hosting virtual sip and sews every Wednesday to help foster connections between her members—a group that is increasingly far reaching. “Even though it’s stressful and hard to be at home for this long, it’s going really well,” Leigh says. “And it’s also remarkable to be able to meet with people in other countries and cities.”

“In our sewing studio in Atlanta, we had six seats. Those classes would fill up, but mostly with local people. Now, we have sewing classes with people attending from the UK, Canada, Australia, everywhere. It’s really opened things up in ways I was never expecting.”

Leigh’s latest venture has done more than expand her worldview. It’s also helped her shift her priorities and go all-in online. “For now, I’ve paused in-person retail and in-person classes. Because in order to sustain it, I would have had to transform my business quite dramatically,” Leigh says.

But with a membership model, her community can continue to grow, no matter what’s going on IRL. “The online world of learning live, it’s here to stay,” she says. “And even when all this goes away, I still want to engage people this way.”

To that end, Leigh has plenty of hopes and dreams for the future. And perhaps most importantly, she has the wherewithal to make it happen.

“The sewing community is huge, and I have big dreams of thousands of members. As long as I can show them that there’s something unique here, and there’s something fun to do, I can grow. And that’s so exciting to me.”