Featured in this Story of Awesome: Being Boss

Being Boss is a paid membership that elevates creative entrepreneurs through weekly prompts, monthly calls, and ongoing support.

The Spark: After Emily found a tribe through her Being Boss podcast, she looked for ways to bring her nearest and dearest followers together in a digital space.

Emily’s Mighty Moment: I don’t think you can make all the decisions for a community by yourself. But I believe you have to be a part of your community’s evolution. And for me, that meant finding my members a home again.”

Emily Thompson will be the first to tell you that Being Boss’ journey has been long, windy, and full of surprises. “We’ve had intention, and purpose, and thought. But there’s also been lots of flying by the seat of our pants and just having a whole lot of fun with it.”

It all started with Etsy, circa 2005. In the site’s early days there was a great sense of community, she says. And making the decision to get into the newfangled world of online business was a no-brainer.

“I was selling some things on Etsy, dipping into online business, and I loved it. And this was before anyone was really doing online business. Back when you didn’t meet people online, and you didn’t tell people that you had friends that you only knew from the internet.”

To support her business on Etsy, Emily started building her first website on her own. Soon enough, her fellow makers were asking her to build websites for them, too. She spent the next couple of years designing webpages and getting more familiar with the world of online business.

Over the years, their respective roles and business models changed, but their connection remained. Emily and Kathleen continued to have conversations exploring the ups and downs of being a small business owner. “There weren’t a lot of people blogging about it,” Emily admits. “There were no resources out there. So it was just me and Kathleen talking it out on our own.” 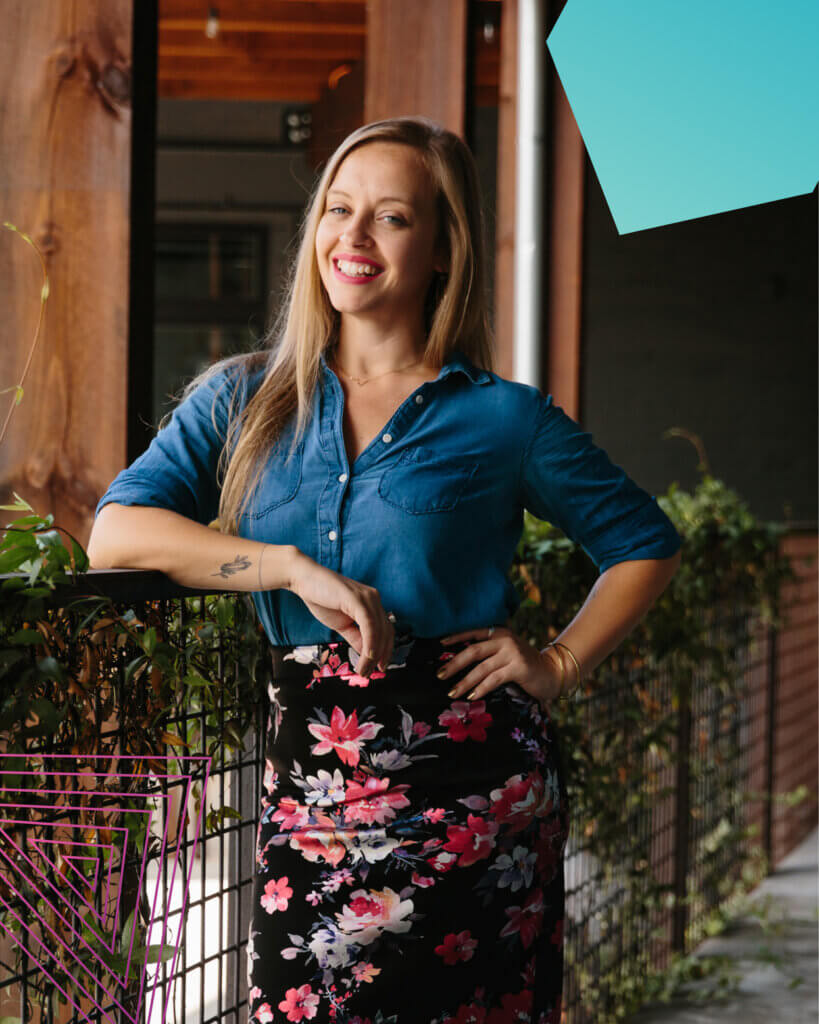 One day, Emily had an idea.

“This was when podcasts were a brand new thing. Everyone was listening to Serial and Invisibilia. So I went to Kathleen and I was like, ‘What if we were to start a podcast and share the conversations we’re having with the people who are on our email lists and who are reading our blogs?’”

After a few weeks, the pair launched the Being Boss Podcast. Within a couple of months, they were topping charts. Their collaboration became a hit in the creative entrepreneur world, and both Emily and Kathleen were taken aback. “I remember thinking, ‘What have we done? What is this thing we created?’ I was blown away by it.”

Within the year, it was obvious that they had built more than a podcast. They had cultivated a growing community, too. To get their followers together, Emily and Kathleen started doing Being Boss vacations, where they invited their tribe to hang out in a city, explore, and talk business. But Emily wanted her followers to have a digital home, too.

So she went to the first place she could think of: Facebook. “Listeners were like, ‘We want a place to connect.’ So we thought, OK, we’ll start a Facebook group. We didn’t really know what we were getting into.”

The Facebook group was a super authentic space while it was small, but once its numbers reached the tens of thousands, Emily noticed there was a massive disconnect.

“We would post new podcast episodes in there, and people would go, ‘What is this?’ So there were a lot of people in our Facebook group who didn’t even know who we were.”

Eventually, Emily and Kathleen shut down their Facebook group and started a Slack channel for their most dedicated followers. They also piled on the value around the Being Boss name, publishing a book, hosting retreats, and building a year-long community at Mighty Networks (back when it was known as Mighty Bell).

After two or three years, both entrepreneurs burned out.

“We had been running our two businesses, we had written a book, we were managing communities, we were planning in-person events, and we were still podcasting every single week. We got to a point where we were just like, ‘No more new things.’”

The pair put their community on the back burner. But last year, Emily decided she wanted to rebuild. “Restarting an online community was really important to me, but that was one of the things that Kathleen really did not want to do. And it required a shift of ownership for me to finally have the ability to do that.”

Emily started the process of buying out Kathleen—who remains her business bestie—and made Being Boss her own. And when it came to finding a home for her people, she came back to one of the platforms she had used before. “By the time we came back to Mighty, it really did have all this added functionality that I wanted and needed to organize and interact with my community. It’s been amazing so far.”

A year in, Being Boss has over 120 members, all creative entrepreneurs that Emily considers her nearest and dearest.

“This isn’t a place where I want to go full in with people who don’t really know anything about Being Boss. This is the place for the people who have drunk the Kool-Aid and who are familiar with our foundations.” 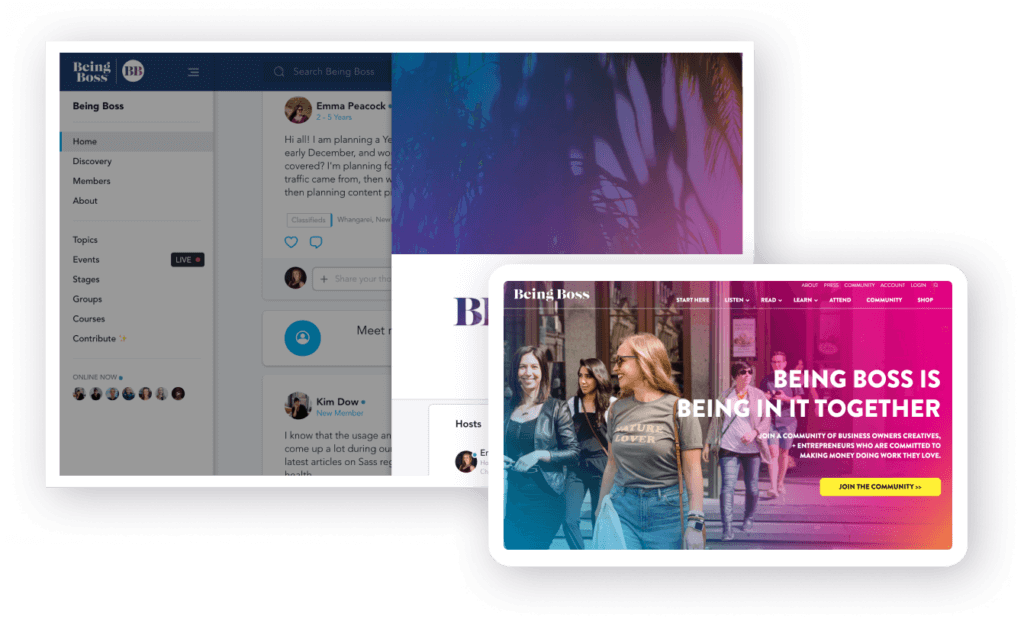 Within the membership, there are three tiers. Community, priced at $10.99 per month, is targeted to what the community calls “baby bosses,” or creators who are early in their entrepreneurial journey. The Community tier offers access to the overall Being Boss community, a monthly Book Club with weekly prompts, and Monday meet-ups, a virtual call where members can troubleshoot and share wins.

Clubhouse, priced at $32.99 per month, was made for creative entrepreneurs with a little more experience. “These are bosses who are in it, and who have been for a couple of years. They’re making a living wage for themselves, but they probably don’t have a team yet.”

In addition to the perks included in the Community tier, Clubhouse members get exclusive access to one of Emily’s podcasts, “Making a Business,” which follows her journey running her product business, Almanac Supply Co. They also get access to monthly Clubhouse Conversation virtual calls, where they workshop a monthly theme; monthly New Moon Intention-Setting prompts and virtual calls, exclusive content bonuses, and early access to events.

For each of those tiers, Emily tries her best to try a bit of everything to help her figure out what sticks. “One of the things I talk about often is testing and changing,” she says. “It’s something we encourage our members to do in their own business, and I model it in the community as well.”

“I created this way of operating through the content, so nobody is surprised when one month in the Clubhouse, I’m doing a live podcast, and the next month we’re having an open forum talking about content creation. My members are down for the ride. And because they’re sharing their experience, and that helps shape the community, it’s also a way of giving them a piece of ownership.” 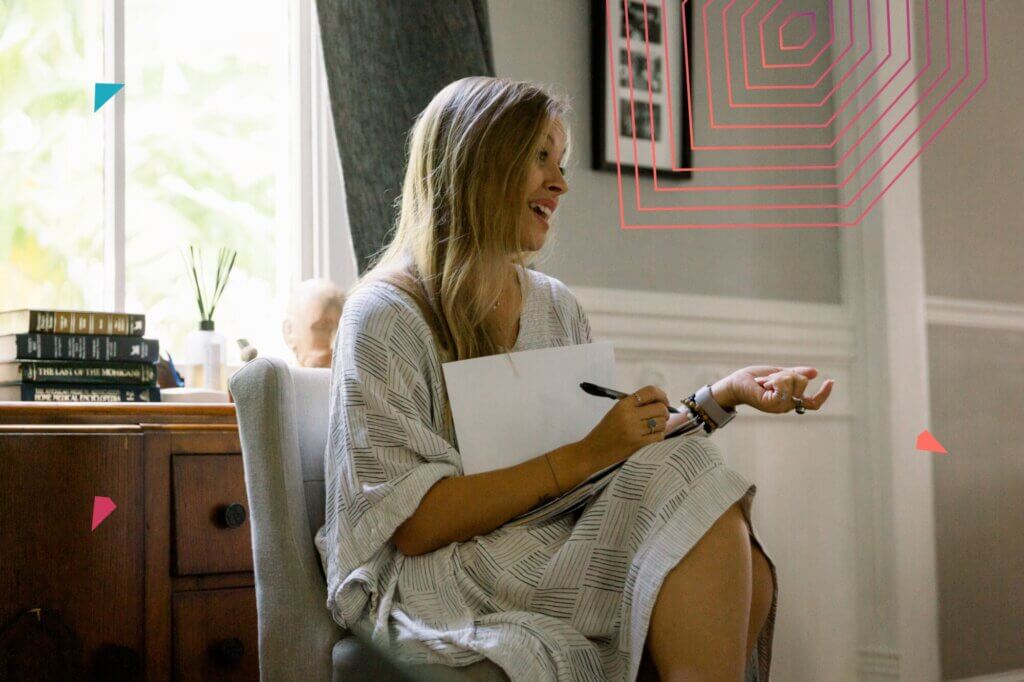 Emily is super satisfied with the membership she’s been able to create so far. Not only is it enabling her members to connect with each other, but Being Boss is opening something else for her members too. “I don’t love using the word ‘empowered,’ but this platform has really empowered our members to make this community their own. They feel at home in a way that doesn’t require me to facilitate every conversation or moderate every comment.”

When it comes to plans for the future, Emily doesn’t intend to rush things. “We can definitely do more members,” she says. “But I don’t have a hardcore aspiration for it. I just want the people who need this community to be able to find it.”

But she does plan to continue to help shape the Being Boss community and contribute to its ongoing evolution:

“I don’t think you can make all the decisions for a community by yourself. But I believe you have to be a part of your community’s evolution. And for me, that meant finding my members a home again.”