Featured in this Story of Awesome: Outer Work

Outer Work is a paid membership and community care club that creates intimate and impactful opportunities for education, reflection, and direct action around anti-racism.

The Spark: With awareness around police brutality and systemic racism growing in the wake of George Floyd’s killing, Lenéa worked to build a space for people who wanted to learn sustainable anti-racism practices, but weren’t sure where to start.

Lenéa’s Mighty Moment:  “We talk a lot about anti-racism work and how the solution to racism is community care. And that’s really what I want Outer Work to be a space for.”

For as long as she can remember, Lenéa Sims has been interested in better understanding the world around her. So much so, that in college she studied everything from sociology and art history to communications and media studies. “I’ve never been able to choose anything,” she says. “So I just did everything.”

But by the time she finished school, she was burned out and knee-deep in post-collegiate flail. “I was experiencing a lot of anxiety and depression, and just having a hard time figuring out where I belonged and what I should do with myself,” she says.

To counteract her feelings of aimlessness, she started exploring the world of wellness—a space she was already pretty familiar with, having grown up in Los Angeles. Still, she had a hard time trying to find where, exactly, she belonged.

“As I got really involved in wellness, I just started to realize that I didn’t really fit in,” Lenéa says. “There wasn’t really a space where I felt like I could be myself. I’m super colorful, and I want to live a more vibrant life. But the wellness I was experiencing was really beige and monochromatic and there’s nothing wrong with that, it just wasn’t my vibe.”

She wanted to give people like herself the space to dabble in wellness without forgoing their own shine—a project that eventually turned into her first digital community, Inner Play (which now lives on Mighty Networks, too). “It’s a space where we deal with self-development and self-help kinds of things, but through the lens of play and creativity,” she says. “It’s all about self-reflection.” 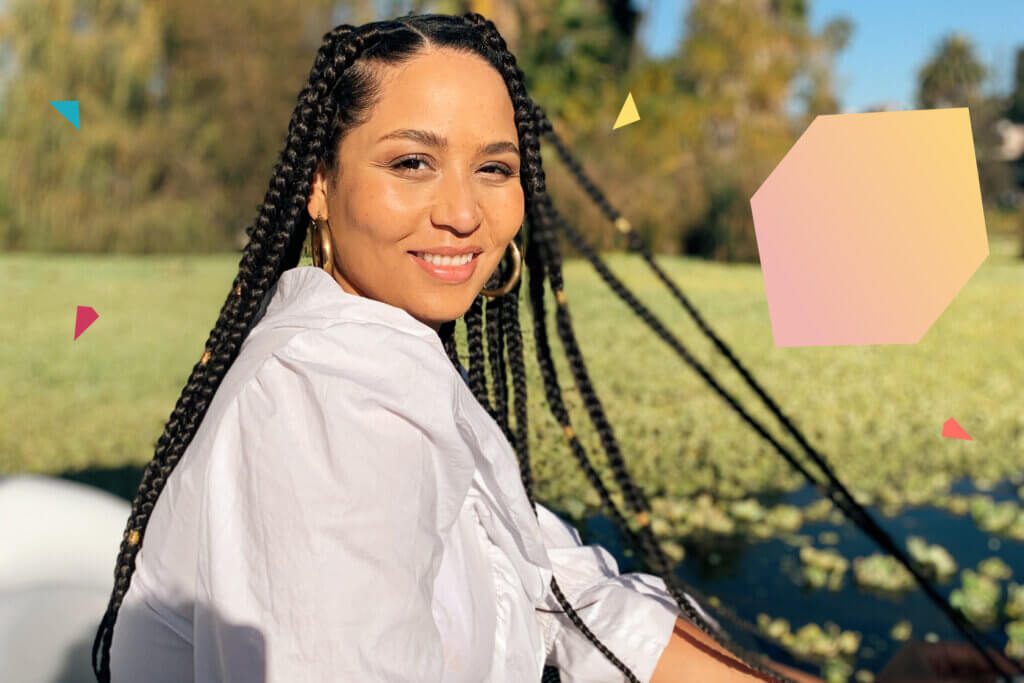 Lenéa continued her work with Inner Play, but she knew too that she had more to offer. And by late May of last year—with social feeds flooded with news and information about racial injustice and police brutality in the United States—she realized there was another space where she could put her expertise and experiences to work.

“I’m a biracial Black woman. I studied sociology. I went to a school that had a very strong activist culture. And after George Floyd was killed, and there was a greater level of dialogue about racism and anti-racism, I thought, ‘Wait a second, I actually know a lot about race.’”

Lenéa found herself armed with the tools to educate around concepts like anti-racism and community care, and making both practices more sustainable. She also knew exactly who could benefit from it.

“I work in the wellness space. And that means I work in proximity with a lot of white people who I know have beautiful intentions and really want to show up, but just don’t know where to start and are really overwhelmed by the idea of beginning.”

Her new perspective sparked a new idea. Lenéa sent out an email to her existing email list with a short, simple message. “I wrote an email saying, ‘This is devastating. And I know that everyone wants to do something, but we don’t know where to start.’ And I just invited anyone who was interested to join a new email list, where I would send out lessons around anti-racism.”

To Lenéa’s surprise, the response was vast. People emailed her back, explaining their relationship to race, or detailing their feelings of helplessness. She knew then that those people would be better served in a space where they could talk to each other. “I figured a community space would open up the dialogue and allow us all to interact around these ideas,” she says.

From there, she started building her new venture, Outer Work, crafting a brand new community space dedicated to sustainably learning and practicing anti-racism. And she did it practically overnight.

“I always say Outer Work was an accident,” Lenéa says. “It wasn’t supposed to be a business or anything. But I built it within 72 hours with 500 members.”

Today, that number has grown to nearly 600. And it has proven to be not only a safe space, but one where members are comfortable learning and reflecting, together. “In the beginning, one member said we had the best comment section on the internet because it was the only place to talk about race and racism without getting trolled,” she says. “And I think part of it is because I do my best to set the tone and say, ‘This is a compassionate space. I’m never going to get mad at you for not knowing something that you don’t know.’”

“My big belief is that the work we practice in Outer Work should be sustainable. I want to help people create a practice of community care that they sustain for a lifetime. ”

While Outer Work has a single-tier membership, Lenéa uses a sort of sliding scale to keep the community accessible with pricing ranging from $4.99 per month to $25.99 per month. She also offers her BIPOC free membership, and a Sponsor Plan at $51.99 per month, where a member can support themselves and sponsor a BIPOC member. 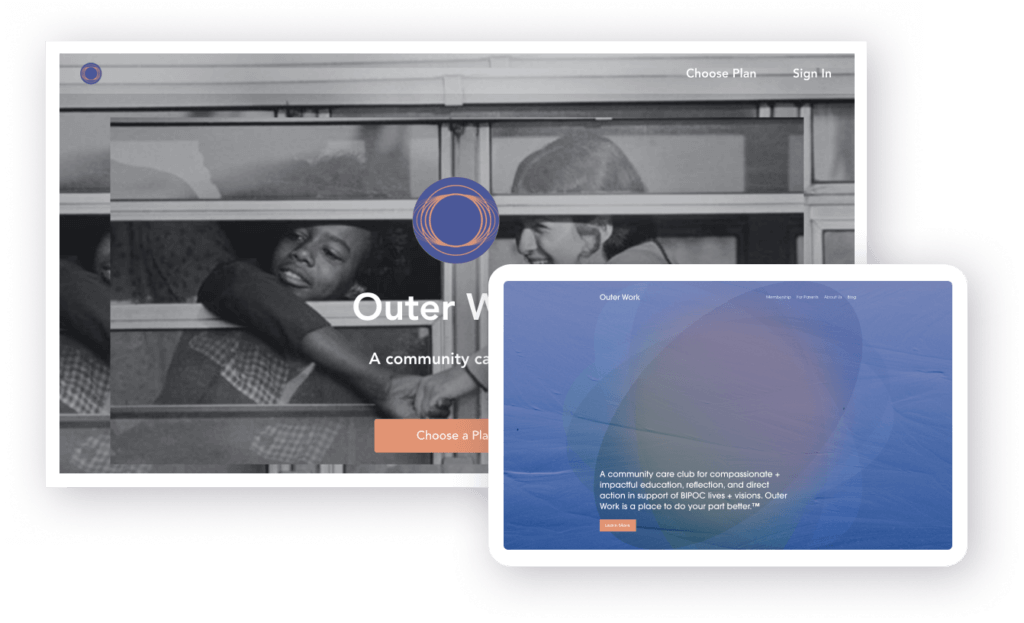 Even so, Lenéa had to experiment to get to the pricing currently in place. “At first, I made the platform free. And a lot of Black women, especially, were like, ‘No, you’re not allowed to do that!’ And they were right. This is a lot of work, and it just can’t be free. It negates so many of the struggles that Black people have had in educating other people, especially around anti-racism work.”

And the resources within Outer Work are far-reaching. The community offers its members plenty of opportunities to learn, take action, and reflect with a community-oriented approach. That includes monthly Community Classes focused on practicing anti-racism across all aspects of life; a Community Care Exchange program that allows BIPOC members to make mutual aid requests to Non-BIPOC and well-resourced BIPOC folx; and the Circle Way, where members can discuss books, films, and more that relate to racism or anti-racism work.

Outer Work also offers members access to Imagine Tolerance, a premium group priced at $39.99, aimed at parents and educators who want to learn how to talk about race, gender, class, and more with children.

No matter the resource, Lenéa does her best to stress that everyone in Outer Work is in this thing together. “I’m always reminding everyone, I’m learning this too,” she says. “I wasn’t born an anti-racist because I’m Black.” 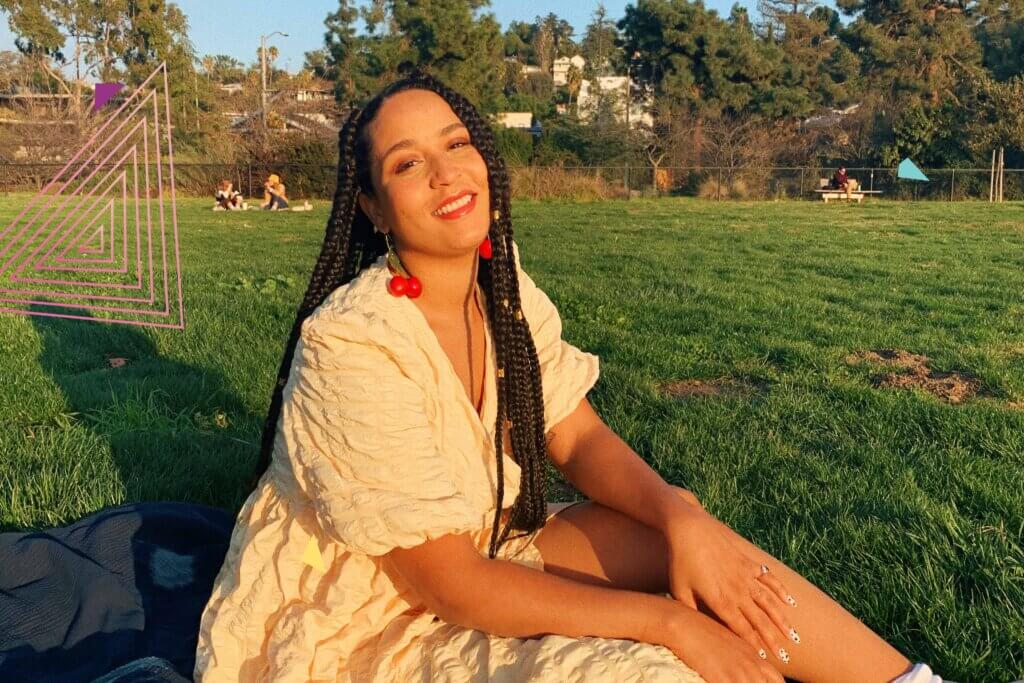 Lenéa has tons of exciting things planned for Outer Work—for here and now, and for the future too. Presently, she’s working on Team Work, a self-paced course for business leaders looking to incorporate anti-racism work into their companies. She’s also hoping to start an editorial fellowship as part of her Community Care Exchange program. The program will essentially offer her members a way to officially contribute to the resources in Outer Work.

In the meantime, she’s figuring out ways to widen Outer Work’s purview with workshops, thinkers and speakers, and eventually, an expanded overall focus. “I really want Outer Work to grow beyond just anti-racism,” she says. “I would love to collaborate with more people, folx who are disabled, folx who identify as LGBTQ+. Because I want the space to be a community care club. And that’s not only about antiracism, it’s about all forms of oppressions.”

Until then, she’ll continue to grow Outer Work—and continue to show her members just how integral community is to change.

“We talk a lot about anti-racism work and how the solution to racism is community care. We have to look out for each other. We have to learn how to support each other. And that's really what I want Outer Work to be a space for.”