Featured in this Story of Awesome: Verbal To Visual

Verbal to Visual is a membership that brings together and educates aspiring sketch noters.

The Spark: Bogged down by the technological nightmare of maintaining a WordPress site with half a dozen plugins, Doug started looking for an all-in-one solution.

Doug’s Mighty Moment: “I was really looking for that deeper level of engagement between me and my students, and also between the students themselves. And I’ve been pleasantly surprised at just how quickly and seamlessly those connections have occurred.”

Doug Neill knew he wanted to help people master the art of visual note-taking. But when he decided to merge his interest in sketch noting with his background in teaching, he wasn’t sure where the journey would take him.

He started with a WordPress site, where he built online courses and resources around the concept of sketch noting with the help of a handful of plug-ins. But between technological frustrations and a lack of dedicated community space for his course members, Doug quickly found himself outgrowing the platform.

“I wanted to foster a deeper level of engagement with the folks that were coming in and learning sketch noting. But it just wasn’t possible. It wasn’t an ideal learning experience.” 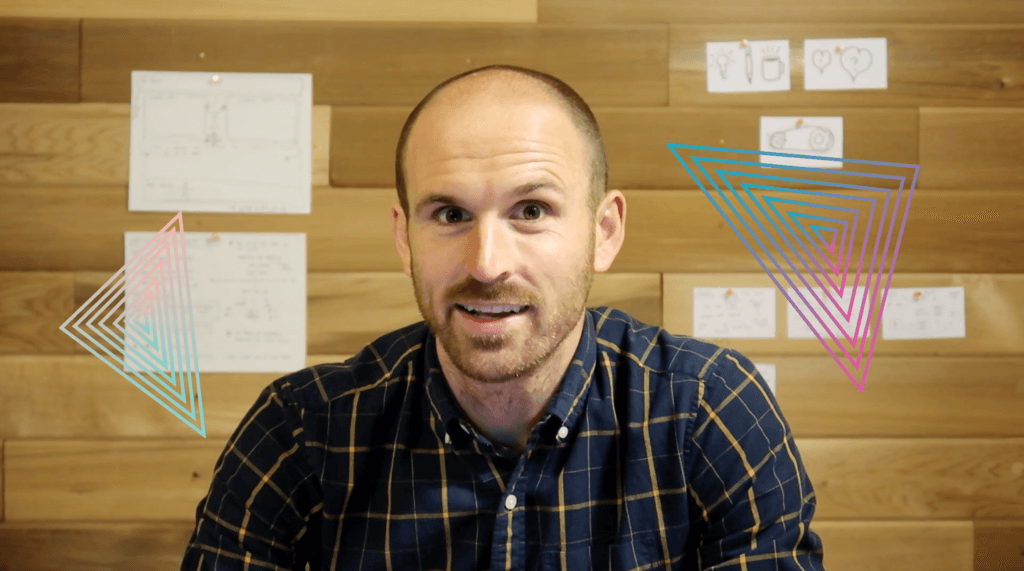 He started eyeing his next move, but could only find course-only options like Teachable and Kajabi. Then, he came upon an episode of Tara McMullin’s What Works podcast that featured Mighty Networks founder and CEO Gina Bianchini. This piqued his interest:

“It was the right thing to hear at the right time. Just hearing Gina talk about what Mighty Networks is all about felt like such an alignment with where I was hoping to take Verbal to Visual. That emphasis on community is what led me here.”

With a Mighty Network, Doug could do more than just offer courses. He could build a community for sketch noters, where they could learn alongside each other and share their experiences with each other, too. And he could do it on an easy-to-navigate platform that was available on the web and native mobile apps.

A new home for his fellow sketch noters in place, Doug took the next step. 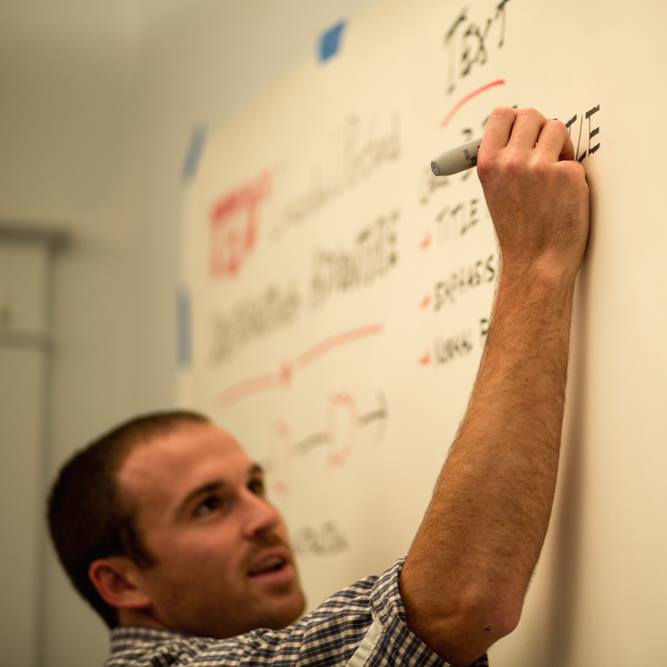 “It felt like online communities were more important than ever”

Doug quickly created his Mighty Network, Verbal to Visual, and signed up for the latest Community Design Masterclass. But as he started transitioning his courses in early March, the pandemic started ramping up:

“It just happened to be the moment when the first lockdowns happened. And it became this situation where everyone was working from home, and it felt like online communities were more important than ever.”

With that in mind, Doug sped up his move. With the help of Community Design, he reworked what the Verbal to Visual community would look like, transferred all six of his established courses, and started developing a seventh.

He decided that he would run his newest course live—building out lessons as he went. That way, he could get feedback from members, and make sure he understood the questions that people had about the topic:

“One of the reasons I was most excited about the transition to Mighty Networks was that I knew I could run the first version of the course live within the network. I had done a lot of brainstorming, but being able to build it over time gave me the motivation to actually keep developing lessons week after week.”

It also meant he would be able to give his initial course members a behind-the-scenes look at his process of brainstorming and building a course. Doug figured the added access to him as an instructor was an easy way to give those members added value:

“I like being able to show my process of things and letting people see behind the scenes. And the people involved in these webinar workshops became a kind of cohort, much like in the Community Design Masterclass. It was super valuable, both for them and for me.”

After a couple of weeks, Doug was ready to launch. 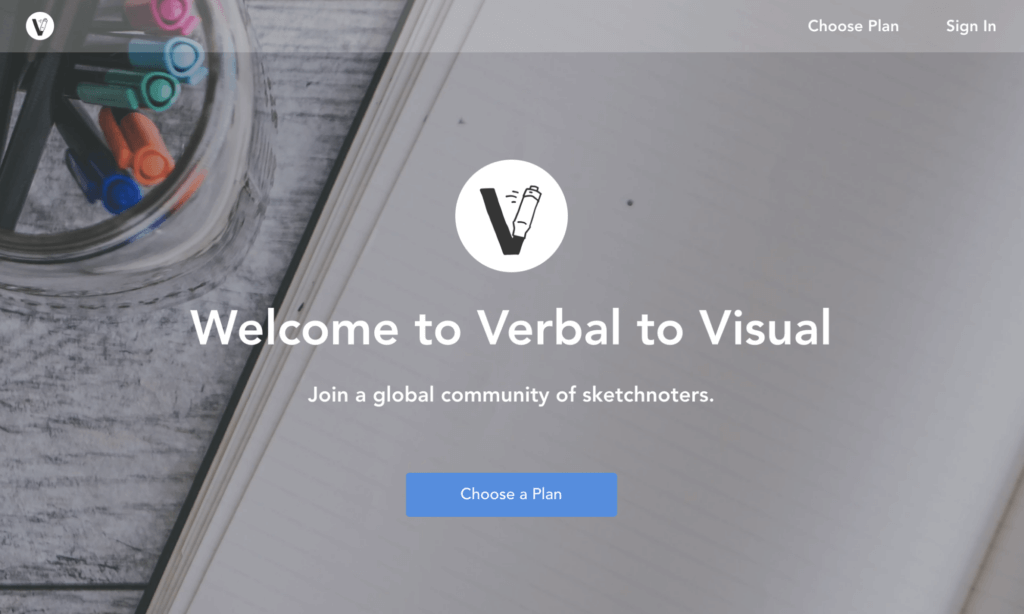 A dedicated space For 1,400+ visual thinkers

Today, Verbal to Visual hosts over 1,400 members total. And Doug gives his members a few different ways to access his wells of content.

His main offering? Verbal to Visual: All-Access Pass, which bundles access to the overall Verbal to Visual membership community with Doug’s full library of self-paced sketchnoting courses, plus weekly live webinars for $19 per month or $149 per year.

The Verbal to Visual library offers several sketchnoting courses, including:

Within the main community space, Doug keeps things organized with a weekly calendar with daily activities, including a question of the week every Monday, and a sketch noting prompt every Wednesday.

He also puts on two live webinars a month. Towards the beginning of the month, he hosts a Mastermind style webinar, where members can talk through challenges and set their monthly goals. Mid-month, Doug hosts office hours, where he encourages his members to engage in Q&A and free-form discussion.

Additionally, Doug shares his latest YouTube videos and podcasts in the main Activity Feed to kickstart meaningful conversations. Plus, he offers one-on-one coaching calls, allowing new course or community members to take part in a 30-minute phone call with him at no cost. In return, and with their permission, he records and releases the chat as a podcast to his larger audience:

“People hop on and give me a quick background of what they’re up to and I help them explore their options. It’s a great way to identify the questions that folks are having as they’re working through a course. And it also ends up being really good promotion because, at some point in that conversation, they compliment something about the courses or the community.” 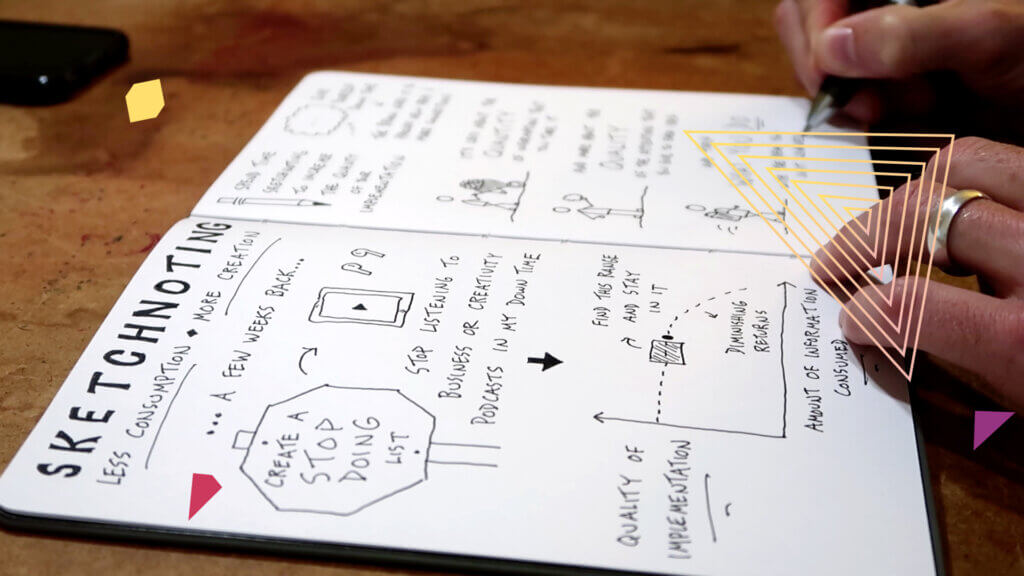 Doug’s move to Mighty Networks has also inspired him to create new content, like a his video series, Sketchnote Breakdown, where he interviews experienced sketch noters. For course and community members, he hosts it as an online event, where they can attend live and ask questions. Afterward, he makes it available on YouTube for his other followers:

“It’s a great opportunity to break down a sketchnote and to see what other people are doing with this skill. Community members get the most out of it because they get that live interaction. But there’s still a public-facing video that can come out of it. It’s been fun seeing people sign up for that.”

But for now, Doug is happy with the new heights he’s reached with Verbal to Visual’s in its new home—and the deeper connections that his new membership has enabled:

“I was really looking for that deeper level of engagement between me and my students, and also between the students themselves. And I’ve been pleasantly surprised at just how quickly and seamlessly those connections have occurred. It’s really exceeded my expectations.”

3 key takeaways from Verbal to Visual’s Story of Awesome