Featured in this Story of Awesome: Boston While Black

Boston While Black is a paid membership site that offers a safe space for Black students, professionals, and entrepreneurs based in Boston to come together, activate change, and build relationships.

The Spark: After experimenting with different ways to support communities of color in Boston, Sheena harnessed her reputation as a connector and started building a digital membership.

Sheena’s Mighty Moment: “This membership is a safe, intimate space for Black people. But it’s also a way to change the face and narrative of Boston.”

Sheena Collier moved to Boston 16 years ago for graduate school. But when she first arrived to Beantown, she had no intention of staying long-term.

“Boston has a reputation of being not that welcoming, and a lot of people of color have a hard time feeling like they belong. It’s hard to find a community here, period.”

But the city had a different idea in mind. After graduating from Harvard, opportunity knocked. Then it knocked again. And again. “I ended up with a really great job. And then another. And I’d think, ‘OK, I’ll stay another couple of years.’ But it just kept happening.”

The longer Sheena stayed, the more attached she got to Boston. Her personal life blossomed. She got politically involved. And along the way, she felt more and more invested in the city.

So she got to work building the one thing that was missing: A community.

“I was leading all of these different things to help me build my own community here: a dinner club, a book club, a finance club. And because of that, I became a resource for other people.”

After about a decade, Sheena took her penchant for community building to the next level. She started a new venture, the Collier Connection, where she helped companies plan events and reach a more diverse audience.

Her motivation for the Collier Connection was simple: Sheena wanted to make the most of her reputation as a connector and get paid for it. “At first, it was a way to monetize what I was already doing. All of it was volunteer, and I wanted to find a business structure for it.”

The Collier Connection led her to a position with the Greater Boston Chamber of Commerce. And her work there led her to what would be a new and exciting mission.

“There’s a huge wealth gap in Boston, and there are a lot of issues around who gets what access. I was doing work with the Chamber around how the business community responds to that, and it gave me a different lens into how the city worked. That inspired me to start posting about my own experiences being in the city — and that’s when I started using the hashtag #BostonWhileBlack.” 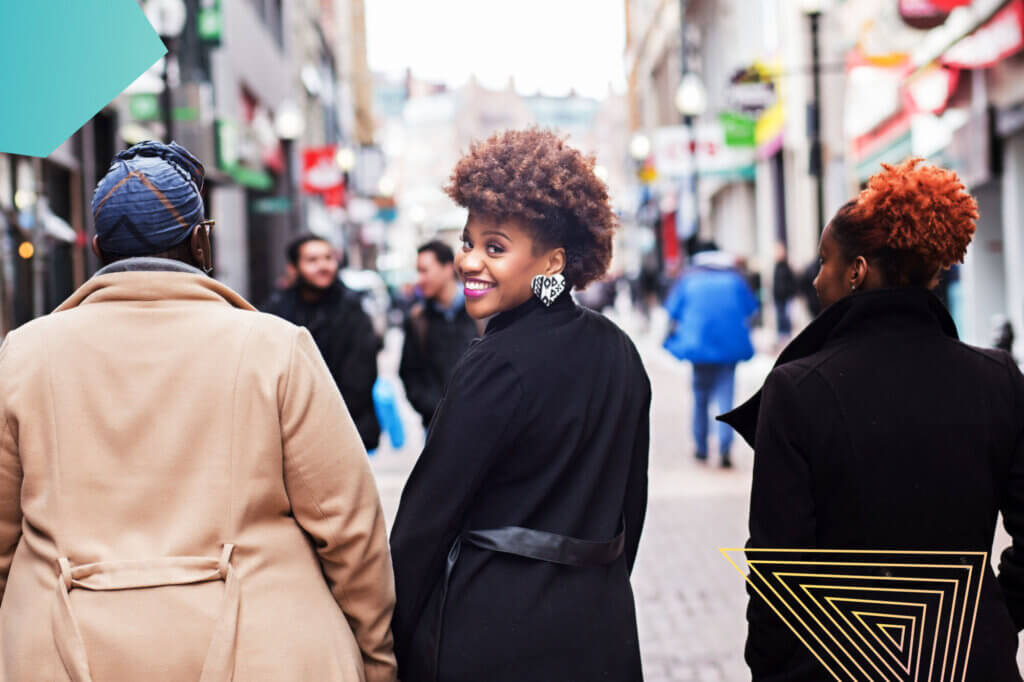 From hashtag to full-fledged membership

Fast forward to 2019: Galvanized by the feedback from her tweets, Sheena held a forum called Boston While Black. She wanted to offer all Black Bostonians a chance to share their experiences, whether they were native to the city or had come for school or work.

“There are plenty of different organizations in Boston doing events. But it felt like people were still looking for an ongoing community they could be part of. Something that wasn’t industry-specific, wasn’t a fraternity or sorority, and wasn’t connected to work.”

Sheena knew that she could be the person to create the sense of community that was missing. But she was hesitant. And she wasn’t sure whether people were going to join.

“I went to Ghana at the end of the year, just looking for clarity. I was like, ‘People say they want this, but once I try to charge for it, are they really going to do it?’”

After a couple of weeks, she came home with a renewed sense of purpose and the confidence to take a leap of faith. And in January, she announced her new membership community: Boston While Black.

Originally, Sheena intended her community to be based around in-person events and mentoring opportunities. Her plan was to build up her waiting list over the course of a year and launch in 2021.

But when the pandemic hit, Sheena was forced to shift her goalposts.

“I’m a very in-person person. Before all of this, I was actually like, ‘We’re online too much. I want to get people face to face.’ And once COVID hit, I was dazed. At first I thought, ‘I guess I’m not going to be doing anything this year.’ But then, I decided to try something different.”

To get an idea of how people were feeling, Sheena touched base with the people who were already on her waiting list. “Throughout the month of April, I just sectioned off small groups of people and did these listening sessions. I asked them, ‘How are you doing? How can I help you right now? And if I launch something virtual, would you be interested?’”

As it turned out, people were very, very keen on the idea of a virtual community and the opportunity to connect with their peers. Sheena knew going digital was the path forward, but she also wanted to give herself the chance to work out a couple of kinks. After all, she was going to be kicking off her new community way ahead of schedule.

So she compromised: Instead of waiting a year to launch, she would get started in July and open up Boston While Black to 100 founding members.

That way, she would be able to experiment her way to a robust, thriving community created alongside her initial members. And when she was ready to open it up to a wider audience, she would have a better idea of how to keep the community running smoothly.

“Our founding members signed up for this early. They bought into the mission. But they’re willing to give us a little grace and space to figure out how to make things work.” 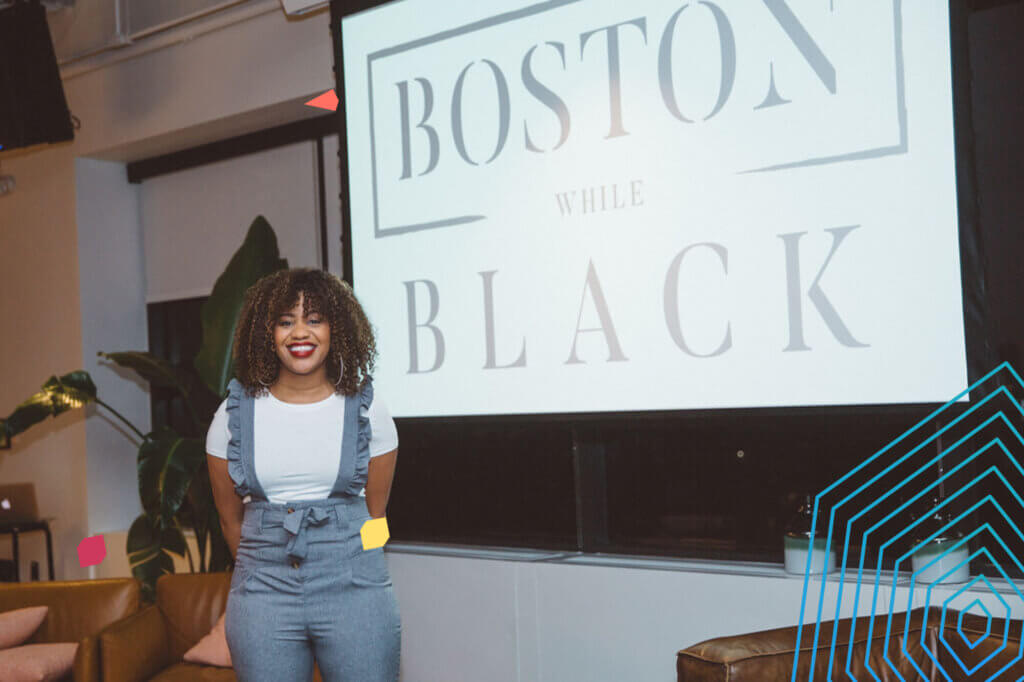 A diverse community of connectors with plenty of room to grow

Today, Boston While Black has over 500 members. The bulk of those founding members joined at $29.99 per month (a price that Sheena plans to raise for her next enrollment period later this year).

The rest joined through Boston-based companies that Sheena has partnered with. “I’m going to companies based in Boston, and they’re buying packages. It gives them a chance to let people know that this is something they support, and it also shows their Black employees that they’re invested.”

Inside the network, Sheena and her team keep things organized with monthly themes—think local Black-owned businesses, and embracing the new normal during COVID—and weekly challenges that support those themes. 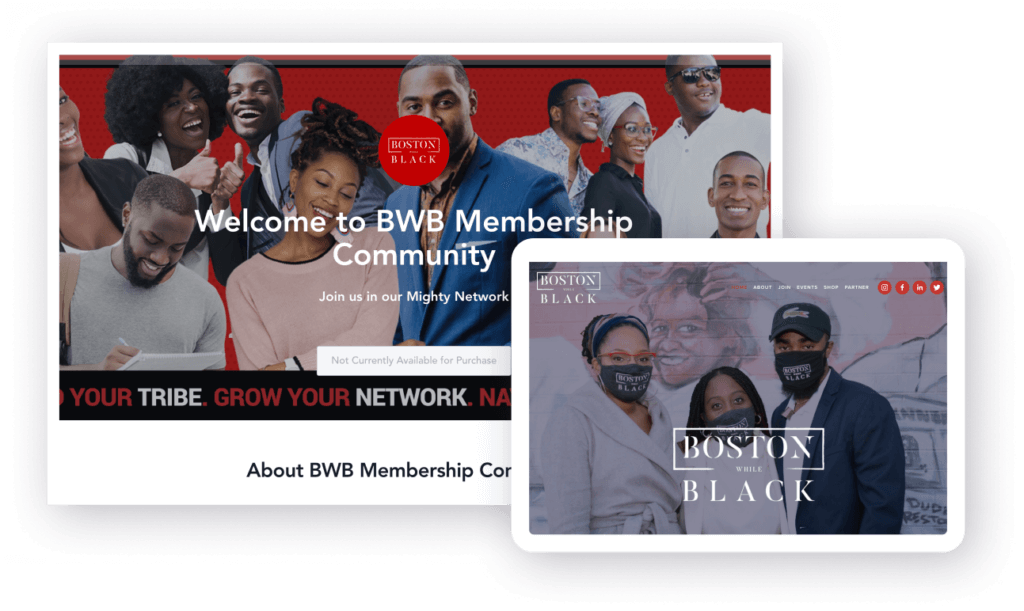 Sheena has also hosted a variety of events within the network, from weekly co-working sessions to Zoom parties (and everything in between).

“Once a month, we have Boston While Black Unfiltered, where we bring in local leaders—in September, one of our state representatives came in and talked about political power. We also have a monthly Unwind event, where we just get a DJ and do a virtual party. They’re a lot of fun.”

Beyond events, the Boston While Black membership community still has plenty of room to grow. Sheena has plans to build courses, groups, and additional membership tiers to offer her members more structure down the lines.

She’s also planning to open up another enrollment period later this year (and she’ll raise the price of her membership, too). “I only opened it to 100 people at first, because I wanted to be able to test things out. But now, we have a waitlist of over 1,000 people. So we’re figuring out our next steps.”

And while Boston While Black blossoms, Sheena’s membership continues to be proof that communities are needed now more than ever:

“We’ve drawn a lot of attention because there was a huge need for this kind of community here. And at the end of the day, this membership is a safe, intimate space for Black people. But it’s also a way to change the face and narrative of Boston.”