There’s Another Path to Financial Freedom and Wealth Without Wall Street Is Showing All 5,500 of Its Members the Way

Wealth Without Wall Street is a membership site for those seeking to establish long-term financial freedom and sources of passive income.

The Spark: With a brand new coaching initiative and a growing podcast in hand, Russ and Joey were looking for a way to grow their audience and give them added value when they found Mighty Networks.

Their Mighty Moment: “We understand the journey. Our customer is the hero. We’re just the people that are guiding them along the path to financial freedom.”

What’s the first thing you think about when you hear the words “financial freedom?” There’s a good chance you start imagining trading stocks, keeping an eye on your 401K, or following the Dow. But financial advisors Russ Morgan and Joey Mure want to change that.

It all started in 2017. The pair started thinking about how they could teach people to become their own bankers. They believed that generating passive income was the key to gaining financial freedom and decided to start a coaching initiative, Wealth Without Wall Street, to prove it.

They knew that once people understood how their money could work for them, they could control their own investments, instead of leaving them in the hands of the financial market. And according to the brand’s Director of Marketing, Thomas Coiner, they knew they could do it without touching Wall Street:

“We’re trying to show people how they can become financially free without risking it all in the stock market. And we’re trying to be their coaches and show them the path to securing financial freedom not only for now, but for later in life too.” 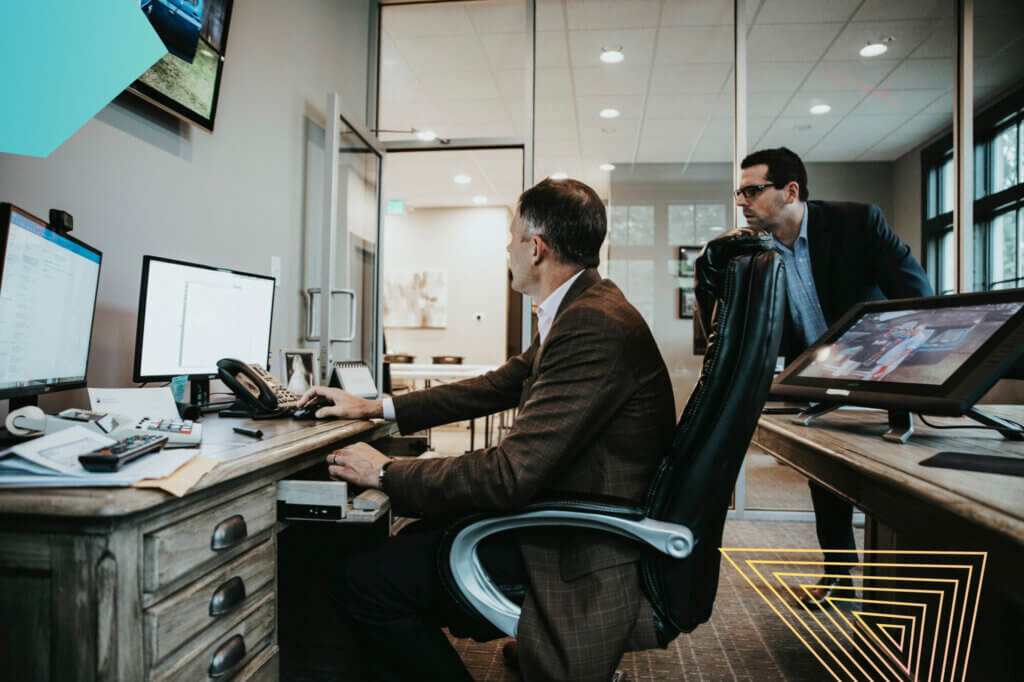 Their growing audience was missing one thing

Around the same time, Russ and Joey also started a podcast to accompany the concepts they were sharing through their coaching. When their podcast audience skyrocketed, they started to consider how they could grow their brand as well.

First, they went with the most familiar option: Facebook Groups. But it didn’t take long for the pair to see how and where the platform wasn’t serving them:

“Part of it is that everyone has Facebook. And it’s so easy to get distracted by a single ping. But our community was also so bound to the Facebook platform, the Facebook branding, the Facebook everything.”

The team started searching for a place where they could spark deeper engagement and bring a greater value to their growing audience.

Russ and Joey also wanted to be able to spend less time running a community. They figured if they could put a robust membership in place, they would be able to build a community that basically ran itself:

“We wanted there to be organic engagement between the people we were coaching. Because it’s not exactly dinner table talk. People aren’t talking about the infinite banking concept (IBC) amongst themselves. So we wanted to provide a place where our members could do that, so they could have those connections and also a sense of authenticity about what we’re doing. Because at the end of the day, that level of authenticity is what encourages people to commit their time and energy.”

Eventually, they found Mighty Networks and a brand new vision. With a Mighty Network, Wealth Without Wall Street could become much more than a basic coaching venture. It could be a place where their followers could create deep, lasting connections around their passion for the topic of developing financial freedom. And Russ and Joey’s team would have a dedicated space to teach the key concepts.

Plus, because they were choosing Mighty Pro, their branded native apps would give Russ and Joey a sense that Wealth Without Wall Street belonged to them, not another app:

“With a Mighty Network, there’s the sense that this is our product, our platform, and it has our name on it. There’s a real sense of ownership.”

Their decision made, the Wealth Without Wall Street team got to work. 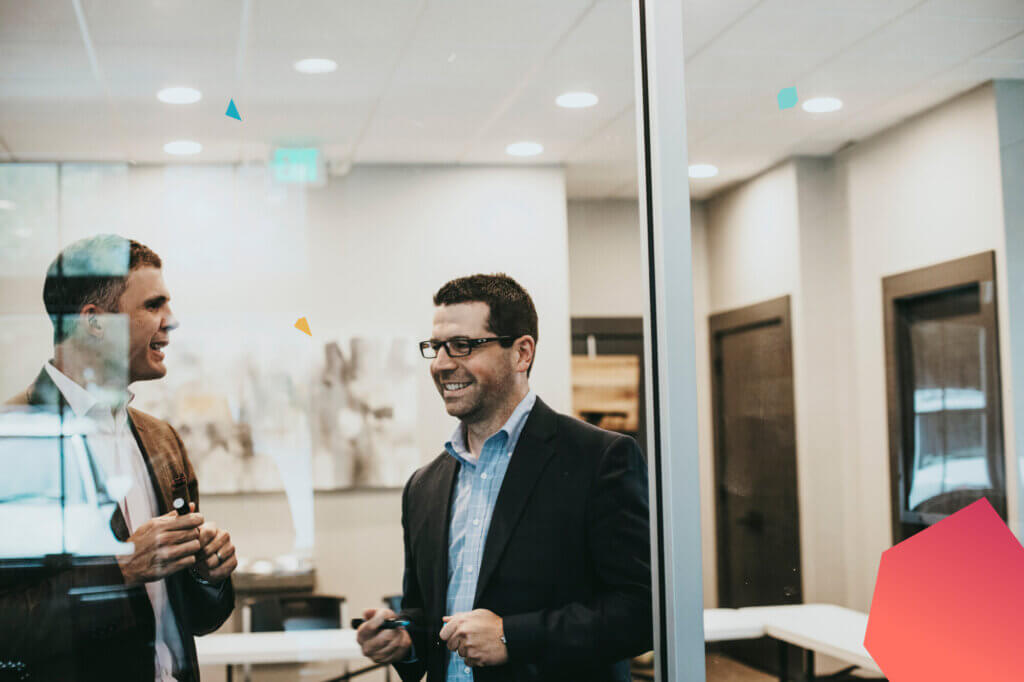 From a paid to freemium model

Their first action item? To figure out what their members looked like. They knew they had a lot of potential members, based on the number of people listening to the Wealth Without Wall Street podcast. And fortunately, that helped them get a pretty good idea of their ideal members fairly quickly:

“One thing that keeps sticking is people with dependents. Parents who are 35 to 55 years old, who are starting to think about the kind of legacy they’re leaving. They’re thinking, ‘What kind of wealth can I accrue over the next 20, 30 years? How can I make sure my kids are taken care of?’”

Next step? Laying out the structure and pricing of their community. Russ, Joey, and their team started with a paid model, charging $39.99 per month or $400 a year for membership access.

But a month in, they started thinking bigger. Was there a way that they could offer educational materials for free and more premium content at a paid level, and still beef up their numbers?

They decided the answer was to shift to a freemium model. That way, the Wealth Without Wall Street team wasn’t just committing to giving their community members a high-value experience. They were also committing to the membership’s future impact.

“The podcast had always been at the top of our sales funnel. We have over 100,000 downloads, and that’s really our first touch with a lot of people. So by going freemium, we’ve opened the door to this community, and we’ve opened up the possibility of reaching as many people as we do with our podcast.”

To pump up the added value, the team put paywalls in place. That way, members that wanted to go deeper and get more information could pay for access to a group or course within the Wealth Without Wall Street community.

The team also made sure that the handful of people who had already paid for membership would be taken care of. Those paid members instantly got free access to the All Things Infinite Banking Concept bundle—which included access to the IBC Inner Circle mastermind, plus two courses—which was priced at $39.99 per month for new members on the free plan:

“We were transparent. We wrote an email where we talked about the reasons we wanted to move to a freemium model: to build more engagement, to get more people inspired, and to really create an opportunity to help everyone grow. ”

With their initial members onboard, the burgeoning community moved forward.

Fast forward to present day: The Wealth Without Wall Street community has over 4,500 members. And that number is growing:

“The courses are a platform to showcase that we are the experts in the room. Establishing that has been crucial, and it works. We already have some of our course graduates posting on the main feed saying, ‘I can’t believe this is actually working. You guys have changed my life.’” 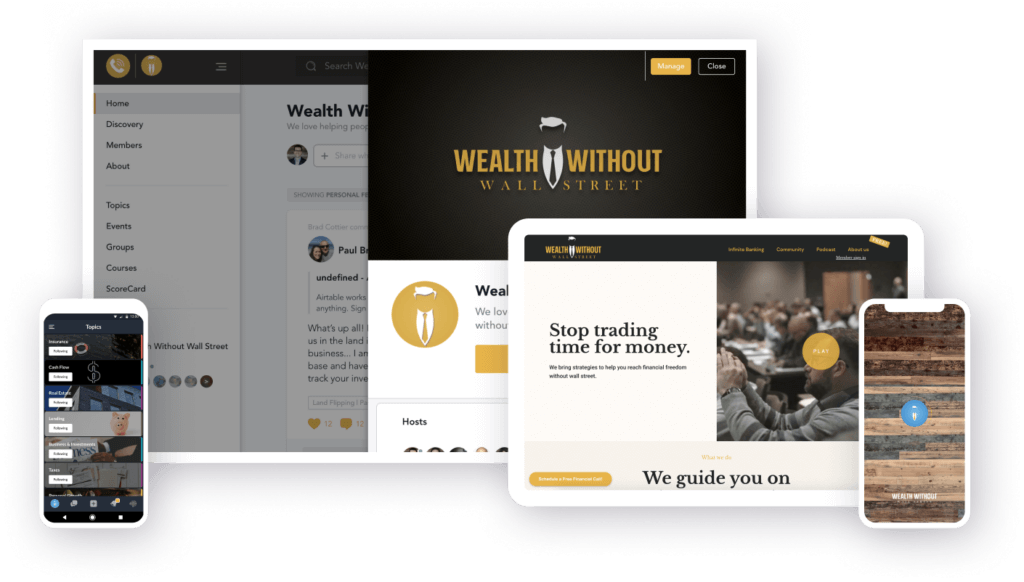 Each of the community’s courses is bundled with access to a corresponding group. Courses that cover basic concepts, like Financial Freedom 101 and IBC 101: Understanding Infinite Banking, are typically free for members to access. If community members are looking to dive deeper, Wealth Without Wall Street also offers paid access to a variety of courses, groups, or the community’s mastermind group:

“This model of treating groups as a premium value has really resonated. The paid content is an opportunity for our members to get more access to the experts in the room, and to have a more intimate conversation with people who have a real experience with these things.”

In addition to courses and groups, here’s what else the Wealth Without Wall Street community offers:

Weekly live Q&As. Every Thursday, Wealth Without Wall Street launches an episode of their podcast, both to the community and the world at large. Then every Tuesday, they use the Events feature to host an exclusive Q&A within the community with the prior week’s podcast guest:

“It’s been a really good marriage of our podcast and our community. And it’s an opportunity for our people to hear from someone who normally doesn’t go so in-depth with these concepts without being paid.”

Weekly session with Russ or Joey. While Thomas runs the day-to-day operations of the community, Russ and Joey check in too. Once a week, they’ll host a live or pre-recorded session where they talk about a certain topic that relates to financial freedom and infinite banking.

One thing that makes these resources resonate big time with members? Native mobile access. Thomas says that the app has been crucial in terms of encouraging engagement:

“We see people using mobile a lot. And it’s been really helpful on our side too, especially when it comes to our podcast and our Q&As. People can RSVP in the app. They get pop-ups. They get reminders. It’s just so easy for them to keep coming back to us.” 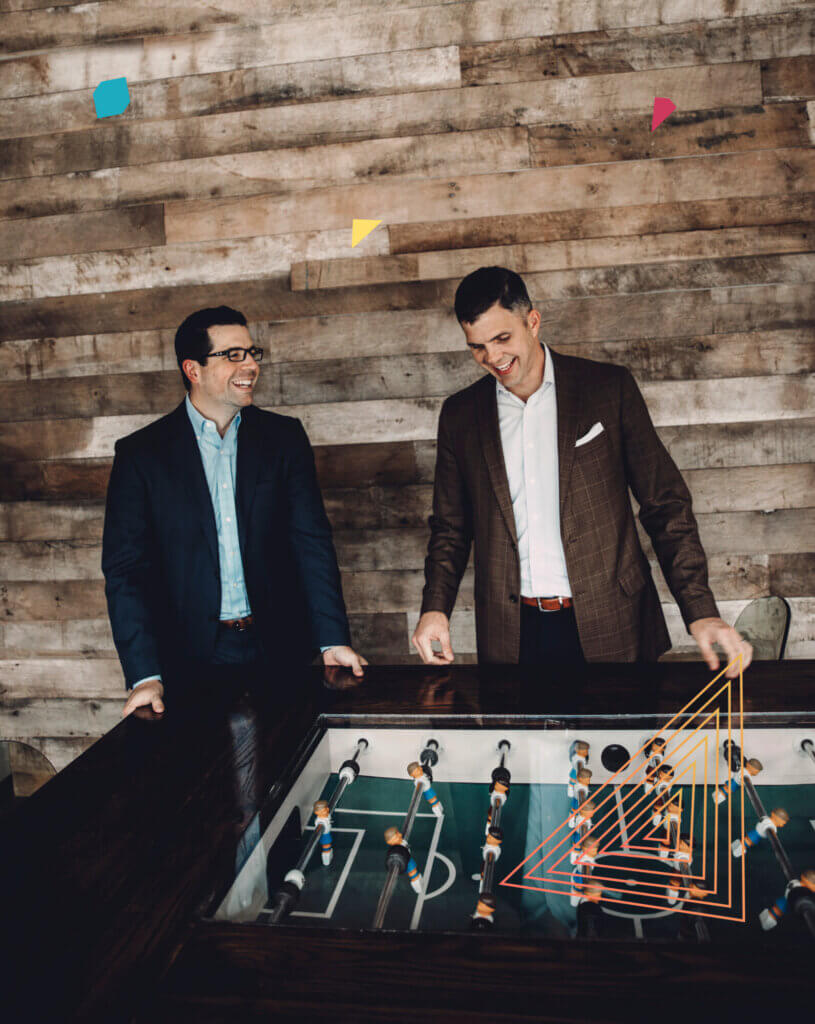 A hero’s journey to financial freedom

So what is this community’s plan for the future? To grow, grow and keep on growing:

“We believe in this community. And we have a lofty goal of 10,000 members by December.”

Meanwhile, Wealth Without Wall Street will continue to guide members on the path to financial freedom—and prove that it’s a lot easier than most people think:

“We understand the journey. Our customer is the hero. We’re just the people that are guiding them along the path to financial freedom.”

Ready to launch your own branded apps?

Get a live demo of Mighty Pro

With Mighty Pro, you can deliver your high-ticket programs, courses, cohort-based learning communities, livestreaming, and events with your own branded iOS, iPad, and Android apps. You’ll also unlock our most advanced analytics, access to the Mighty Pro Design Lab, and 1:1 strategic services.

"We Moved Our $10M Nutrition Coaching Business Off Facebook Groups To Mighty Pro."

This Is Octo Members, a Private Membership Home to Over 3,100 UK Finance Professionals

Above and “Beyond”: These Two Communities Are Helping Over 54,000 People Impacted by Diabetes to Live Well, Now

Welcome to the Academy to Innovate HR, a Course Community Home to 7,300 Professionals

"We Moved Our $10M Nutrition Coaching Business Off Facebook Groups To Mighty Pro."

This Is Octo Members, a Private Membership Home to Over 3,100 UK Finance Professionals

Above and “Beyond”: These Two Communities Are Helping Over 54,000 People Impacted by Diabetes to Live Well, Now

Welcome to the Academy to Innovate HR, a Course Community Home to 7,300 Professionals