Featured in this Story of Awesome: Goes To 11

Goes to 11 is a paid membership site and mastermind group that gives live sound engineers the opportunity to level up their skills, get better gigs, and elevate the craft.

The Spark: Nathan’s podcast Sound Design Live inspired him to bring his listeners together.

Nathan’s Mighty Moment: “Everyone in my industry wants to work on the biggest, most complicated tours in the world. And my hope is that this community can help get them there.”

Nathan Lively had always known where his passion lied: in the niche world of live sound engineering. And with Lively as his last name, it sure seemed he was destined for it.

In search of fellow sound engineers who shared his passion, Nathan started Sound Design Live in 2015, a podcast where he could share his experiences and insight, and interview leading innovators in concert, theater, and corporate productions. Before he knew it, Sound Design Live started gaining momentum. And little by little, Nathan’s audience started asking for more:

“More and more people were expressing interest in the stuff I was talking about and wanted to learn more. It got me thinking, 'How can I help the people that I’ve started to meet because of the podcast?'”

Nathan figured offering an online course could be a good way to share his expertise, but he wanted to learn as much as he could before he got started. He decided to get his bearings with a business coach, who helped him navigate the world of creating and offering digital products. Soon after, he found the Course Builder’s Laboratory, an intensive that offered coaching and support to help people launch their own successful online courses. Nathan was hooked:

“I was really inspired by the structure of the lab itself. It offered pre-recorded videos and biweekly office hours, and I decided I could do the same thing for my own audience.”

Eventually, he launched a couple of courses, including his flagship offering, Pro Audio Workshop: Seeing Sound, where he provided education on the technical aspects of live audio engineering. It wasn’t long before his students expressed a desire to create connections with each other and start networking. He started brainstorming ideas for how he could get his people in touch with each other:

“I was familiar with a few other audio engineering courses that had forums attached to their courses, but within those, people wouldn’t get a response to their questions for a few days. So I knew I didn’t want to go that route. I wanted to really prioritize the idea of a place where people could get access not only to me, but to everyone else in the group. And I wanted them to be able to get answers more immediately.”

A new discovery makes way for a new kind of community

Nathan started experimenting with different apps, in the hope that one of them would be able to provide his students the community they so needed. But none of them were quite right:

“I started on Slack, but that became cost prohibitive. Then I tried Discord, but there were a lot of limitations, feature-wise. And a lot of my members had been in a course attached to a Facebook Group, but they found the experience overwhelming.”

That’s when he found Mighty Networks.

Nathan would be able to provide more with a Mighty Network than he ever could on the other apps he had tried to make work. He could:

With a home for his course community in place, and taking inspiration from one of his favorite films, “This Is Spinal Tap,” he gave his membership a name: Goes to 11.

The more motivated, the better

Next, Nathan went about finding and recruiting members for his new venture:

“I wanted to focus on quality over quantity, and I really wasn’t looking for a membership of 20,000 to 50,000 people. I wanted a group of 70 people who would be really active, who cared about each other, and who were out there working on shows and looking to improve themselves.”

He decided to invite students who were actively taking his Pro Audio Workshop into his course community. That way, he could ensure that the community was filled with active members who were engaging with each other, and asking and answering questions.

He also decided that he would create a mastermind group within his Mighty Network for his most motivated followers. To identify who, exactly, those people were, Nathan took a direct, one-on-one approach, contacting the people he thought would be interested, and inviting each of them to an initial interview:

“I really relied on this book, 'The Mom Test,' to help me out with that. It’s the best explanation of how to talk to people about your product in a way that encourages them to give honest answers. And that way, when I ask them, 'What’s your biggest challenge around this topic? What do you think the ideal solution is? And if that were available, would you buy it?' I can get an honest answer out of them, gauge their interest, and make sure they’re motivated enough to contribute to a membership.”

After the initial interviews, he followed up with potential mastermind members and talked to them not only about the trends he discovered, but the ideas he had for helping them solve their issues:

“It’s really important to me to figure out how to communicate about these topics, first and foremost. It takes a little bit longer, but I’m happy to do more work at the beginning and go one-on-one so I can get something off the ground and make sure that it’s good.”

Using member feedback, Nathan made some small adjustments and prepared to launch his new course community and mastermind group.

Creating connections and navigating challenges, together

Today, Goes to 11 has 177 members and offers two membership tiers.

Access to the Student Membership is free for students currently enrolled in one of Nathan’s courses for up to six or 12 months, depending on the course package they choose. The membership also includes access to:

The Pro Audio Mastermind membership, priced at $46.99 per month is an invite-only mastermind group where especially active contributors get an opportunity to connect. These members get more direct contact with Nathan and can reach out to him directly for any challenges they’re working through. That membership includes:

Nathan is also still using his one-on-one approach to reach out to his members from his Student Membership individually when their courses are almost finished, and see if they’re interested in what the group has to offer after the course is done. If so, they’re invited to remain in the group for $16.99 per month or $184.99 per year:

“When someone joins the community, it triggers a Zapier that creates a reminder six months ahead on my calendar. So I’ll have a bunch of reminders when people’s time is almost up, and I’ll reach out to them individually and say, 'Hey your time is about to run out. Are you interested in staying in the group?'

There are some people who will reach out and say, “I don’t post a lot, but I really love reading the posts and being a part of the community.' They aren’t necessarily the most engaged, but they’re still getting a lot of value out of that access. And I respect that.” 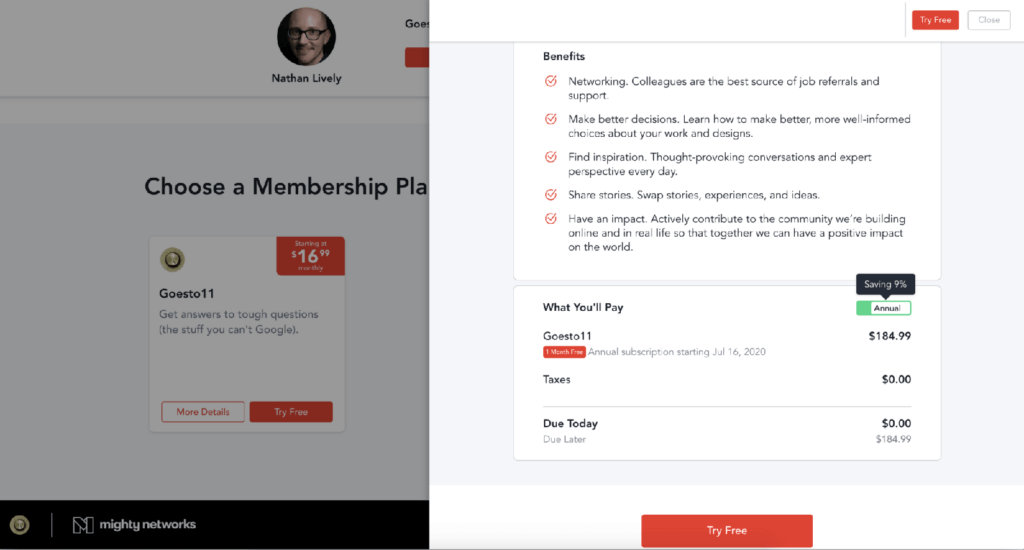 Following the sounds of success

With Goes to 11, Nathan has been able to bring his passion to people who share his motivation to improve, and are as deeply invested in the world of live sound engineering as he is. Along the way, he’s also been able to help his fellow live sound engineers meet the right people, network with each other, and navigate challenges together:

“Everyone in my industry wants to work on the biggest, most complicated tours in the world. And my hope is that this community can help get them there.”

Looking towards the future, Nathan hopes to continue to expand his community by partnering with other industry experts to help him reach new audiences:

“I want to continue to build and maintain those relationships, and I want to keep getting people to try new things with me. I’ve started involving partners, who have these bigger lists and have really helped to expand my circle. I’ve seen a bunch of new people come in just from that.”

He also wants to move towards offering a single course, while offering occasional Live Sound Summits to keep his members excited:

“We just finished a Live Sound Summit, where we hosted different talks from 39 different speakers—audio educators and engineers and more—over five days. It was a great way to bring everyone together and offer some really valuable resources.”

“I’m most interested in testing new things because I think this community is valuable, and I want to keep improving it, and there’s still so much for me to learn, too. And the only way to figure that out is to keep launching, keep delivering, and keep getting feedback.”

3 key takeaways from Goes to 11’s Story of Awesome