Featured in this Story of Awesome: Mindful Living Collective

The Mindful Living Collective is a private community and collaborative space for mindful living and learning.

The Spark: In search of a way to offer his course members a deeper and more lasting change, Elisha started looking at how he could incorporate a community component into his courses.

Elisha’s Mighty Moment: “We’re always testing new things. We’re always experimenting to see how things go and how people like them, and whether or not it gets them closer to that transformation.”

As a psychologist and mindfulness teacher with nearly 20 years of experience, author Elisha Goldstein knew his way around the world of courses. And there was always one thing that stuck out to him:

“At the end of every eight-week course, people would say, ‘Wow, that was so cool. That was transformative. Now what?’”

The science behind his observation made sense. The courses themselves had a great deal of impact, but that impact waned over time. And Elisha had an idea brewing about how he could make a shift:

“I realized, both as a psychologist and just in my own experience, that we make change most effectively when we have relationships with other people who are also inspired or interested in doing the same thing. So six years ago, I thought, ‘If I create a six-month program, people will be able to go deeper and get more lasting change.’”

Shortly after, he launched A Course in Mindful Living on Ruzuku, a course-only platform. There, he gave his students the tools to transform their anxiety, fear, and stress over the course of six consecutive months.

Because the course was longer, his people were better able to build relationships. But when the course came to an end, they were still asking the same question: “Now what?”

Elisha launched the course a few more times, all the while thinking about the best way to move forward. Eventually, he had an a-ha moment:

“People need to be fed into a community that has some sort of active, continued engagement over time. Even after six months. I knew I needed a community platform that could live alongside my course.”

It didn’t take long for him to find a solution in Mighty Networks. 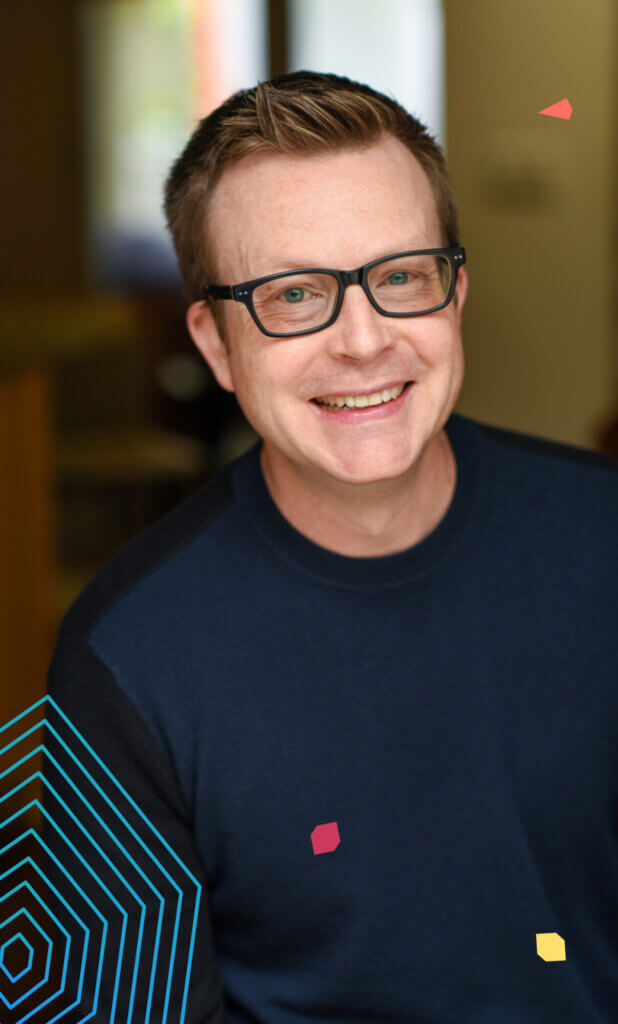 Answering the call for connection

Elisha quickly established a paid membership community, The Mindful Living Collective. There, his course members could continue to foster relationships with each other and practice living mindfully. And once Mighty Networks introduced the course feature, Elisha moved the rest of his content over.

Finally, he had a course and community all in one place. But, as he admits, his focus was still primarily on his course, and not necessarily his newfound community.

Once the pandemic began, Elisha saw the opportunity to change that. And in March, he felt the call to make a shift:

“When COVID hit, I started thinking about how so many people were going to need support and community. That’s when we decided to open up the Mindful Living Collective to everyone.”

With the help of his team, Elisha shifted his paid community into a free one, creating detailed Topics, Groups, live events, and more to help people through the tough times. As he got used to the new normal, he started picking up on his new members’ behaviors. And he found himself surprised:

“The idea was to go free for a while because this is what the world needs. I knew eventually, we would need to charge for it. But since March, what I realized is that when something is just free, it doesn’t have a lot of value. People just don’t value free things very much.”

That wasn’t all. Elisha had also observed that only a small amount of people were truly engaging. Immediately, he started thinking about how he could create a more personalized experience for his most motivated members. His solution? A premium group called the Inner Core:

“With the Inner Core, we have a really dedicated group of people who are connected within Mighty. And then we give them something extra with a chat channel outside of the community, just so they can engage daily and really build those connections.”

Today, the Mindful Living Collective is home to over 6,500 members. To keep an eye on who’s coming in, Elisha has the community set to private. And there’s still plenty of content for Elisha’s free members:

“The free content exists for anyone who is interested in understanding what it means to live mindfully. We have really awesome free content and an awesome community of people who want to connect. Then, when you’re ready and motivated to make that change or transformation or healing in your life, we have these courses.” 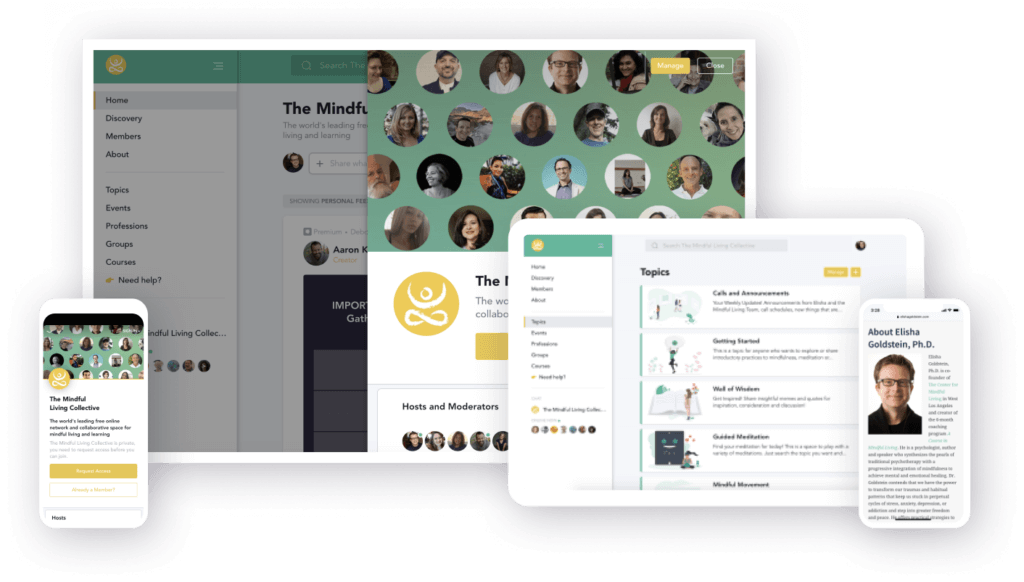 Here’s what else the Mindful Living Collective membership includes.

Topics{"type":"element","tagName":"br","properties":{},"children":[]}Elisha and his team have created many different Topics, from the Wall of Wisdom—where members can share insightful memes and quotes for inspiration—to Guided Meditation—where weekly meditations hosted by Elisha or a special guest live.

Challenges{"type":"element","tagName":"br","properties":{},"children":[]}He’s also seen high engagement with customized challenges. His most recent one, the 21 Day Racial Equity Challenge, was free to all members and aimed to create awareness around racial and social justice.

Courses{"type":"element","tagName":"br","properties":{},"children":[]}Courses in the Mindful Living Collective range from older, evergreen content that Elisha has migrated over to newer content. His most recent course, 21 Days to Relieve Anxiety Naturally, was priced at $59 and walked members through changing their relationship with anxiety.

In the next month, he’ll also be releasing a new cohort of Finding Your Way Back to Center. In the five-week course, priced at $395, Elisha will walk members through creating a reliable daily routine and ritual to find more calm and clarity in daily life.

The Inner Core{"type":"element","tagName":"br","properties":{},"children":[]}Finally, there’s the Inner Core, a premium Group priced at $99 per month. The Inner Core is curated for Elisha’s most motivated members, who get opportunities to engage daily, both inside and outside of the network with the app Voxer.

Members of the Inner Core get more access to Elisha, as well as: 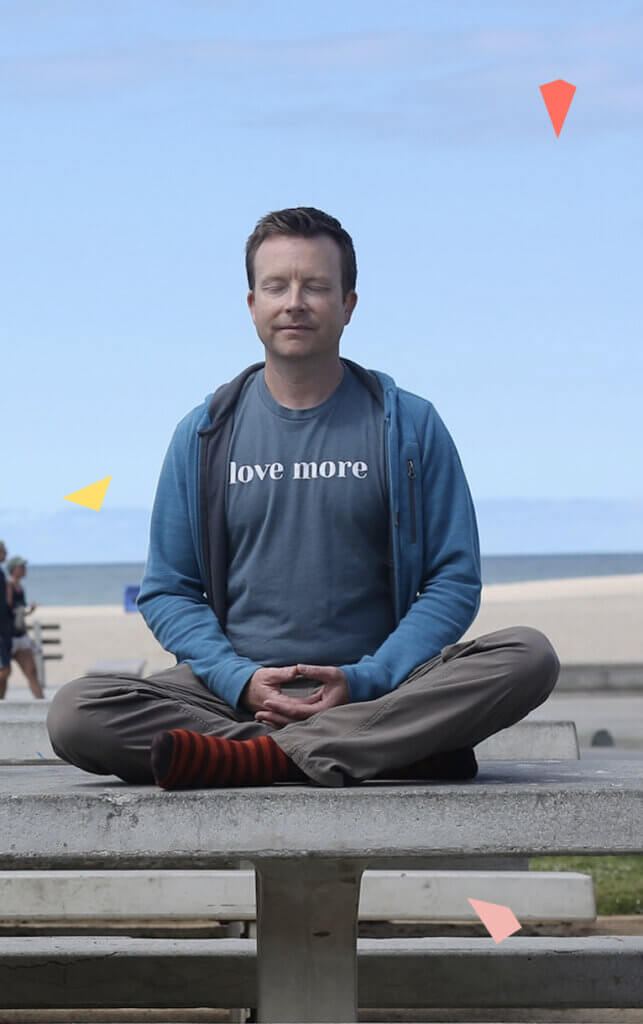 Meditating on the future

Elisha is already planning for the future. He and his team are working on a teacher training certification that’s set to launch in January within the Mighty Network. And he also wants to expand the Inner Core:

“Our vision is that we want to be replicating the experience of this Inner Core across various domains. So there will be an Inner Core for entrepreneurs, and Inner Core for young adults, and so on.”

Until then, Elisha is still experimenting with how to make his community valuable, and how to best create connections with his free members:

“We're always testing new things. We’re always experimenting to see how things go and how people like them, and whether or not it gets them closer to that transformation. I really like the structure we’ve settled on at the moment, and it will absolutely continue to evolve over the months and years ahead.”