If you’re wondering if Facebook is the right place to build a community, here are some disadvantages to Facebook Groups you should know about first.

So you’ve got something important to start, you want to get a group of people together for some reason, and you’ve probably come to the same conclusion a lot of people do:

After all, Facebook groups are free, a lot of people have a Facebook account, and it’s tempting to think that you could pretty easily get a thriving community together.

A lot of people go through this thought process and launch the group, but they realize pretty quickly that Facebook groups have some issues for just about anything you’d want to do with them.

In this post, we’re going to talk about the disadvantages of a Facebook group for hosting any kind of online community. Whether you’re trying to use it as value-added for an online course, whether you want it for your religious community, or whether you’re looking to get a group together who share similar interests and passions, this post will walk you through some of the challenges of starting a thriving Facebook group.

Many creators or community leaders have shared a link to their Facebook group on social media and watched as people flooded in.

And then they hit publish on their first post: “Welcome to the group! Introduce yourselves and tell us all why you’re here!”

And nothing happens. No likes. No comments. No happy people saying, “Hey, thanks! We’re glad to be here!”

A lot of creators would blame themselves at this point, but they shouldn’t. Chances are, the lack of engagement isn’t their fault. It’s the algorithm.

When you create your content in a Facebook group, people often just don’t see it. This is in part because of the notification system that we’ll talk about below. But it’s also because you’re fighting with the Facebook algorithm that only has one goal: show your members as many ads as it possibly can without having them abandon the platform.

You’re trying to create a Facebook group for people to enjoy. And, in theory, they’d love your posts.

But they also love the funny GIFs, the videos, the “Which Disney princess are you?” quizzes, and the pics of their ex with their new SO on vacation (ok, maybe they don't LOVE those).

This is Facebook. There’s a lot happening. And, as we already mentioned above, to top off all the distractions, Facebook monetizes your members’ news feeds by plugging them full of all the ads they can possibly handle.

How is this a place where people are going to have the bandwidth to focus on being members of a group?

It’s way better to grow your group in a place where your members come specifically to interact with your content, and not one where you have to hope they stumble on it.

The best alternatives to Facebook Groups will let you build thriving communities with subdiscussions, tons of options for engagement and membership, hosting virtual events, and even teaching an online course if it’s your jam.

This is connected to the algorithm. But the notification system in Facebook Groups is tough to balance. Unlike communities built for a specific purpose, where your members log on BECAUSE they want to see news from the community, a Facebook Group is one of many things on your users’ feed.

This means that for some, there will be too many notifications. For others, there won’t be enough.

Users can choose their level of notification. But, by default, they’ll only see highlights. This means Facebook chooses what to show them.

If your users are in 20 groups (which a lot of people are), Facebook will decide when they get notified about yours.

Even if you can get past the stuff above, one of the biggest disadvantages to Facebook Groups, that’s becoming more of an issue with each passing year, is the privacy issue. After it was discovered that Facebook was being used for disinformation in an attempt to sway election campaigns, people were understandably upset.

After everything from widespread pandemic disinformation to whistleblowers talking about the negative effects of the platform, more and more people are boycotting Facebook.

If you’re trying to bring members together, and you’ve got a platform that people refuse to use, that’s a huge disadvantage. Even if 5% of your members refused to join because a community was on Facebook, would it be worth it to lose those people–especially when there are much better alternatives?

6. The lack of branding options

So you launched your Facebook group, and you’ve added your image or logo to the profile pic and an image at the top.

Congratulations, you’re done branding your group. And it still looks like… well… every other Facebook page and group.

While it might not be a dealbreaker to some people, the ability to add your own custom branding to a group you host is really nice to have. This is even more important if you’re a business and you’re trying to build a customer community that fits your brand.

At the end of the day, when you build a group on Facebook, you don’t own it. If you get hacked, you’re out of luck. If Facebook decides to shut you down or change its rules, you’re at their mercy.

And way too many people have spent a lot of time building something on platforms like Facebook only to find themselves thrown out because of a hack, then trying desperately to get their access back.

Finally, your Facebook group won’t show up in search engines. This might not be a big deal to people who are searching for a place for an existing community or running a closed group. But if you’re trying to grow your group and add members it’s pretty annoying that people can’t even find your group by searching for it.

While the free price tag on Facebook Groups is tempting, that comes at a cost. In this case, the cost is less member engagement, less privacy, and some users who won’t join because of it.

That means that the disadvantages of Facebook Groups outweigh the advantages for many groups looking for a home. If you’re looking for a better alternative, we’ve created an elegant, white-label platform that lets you do everything Facebook does and more. 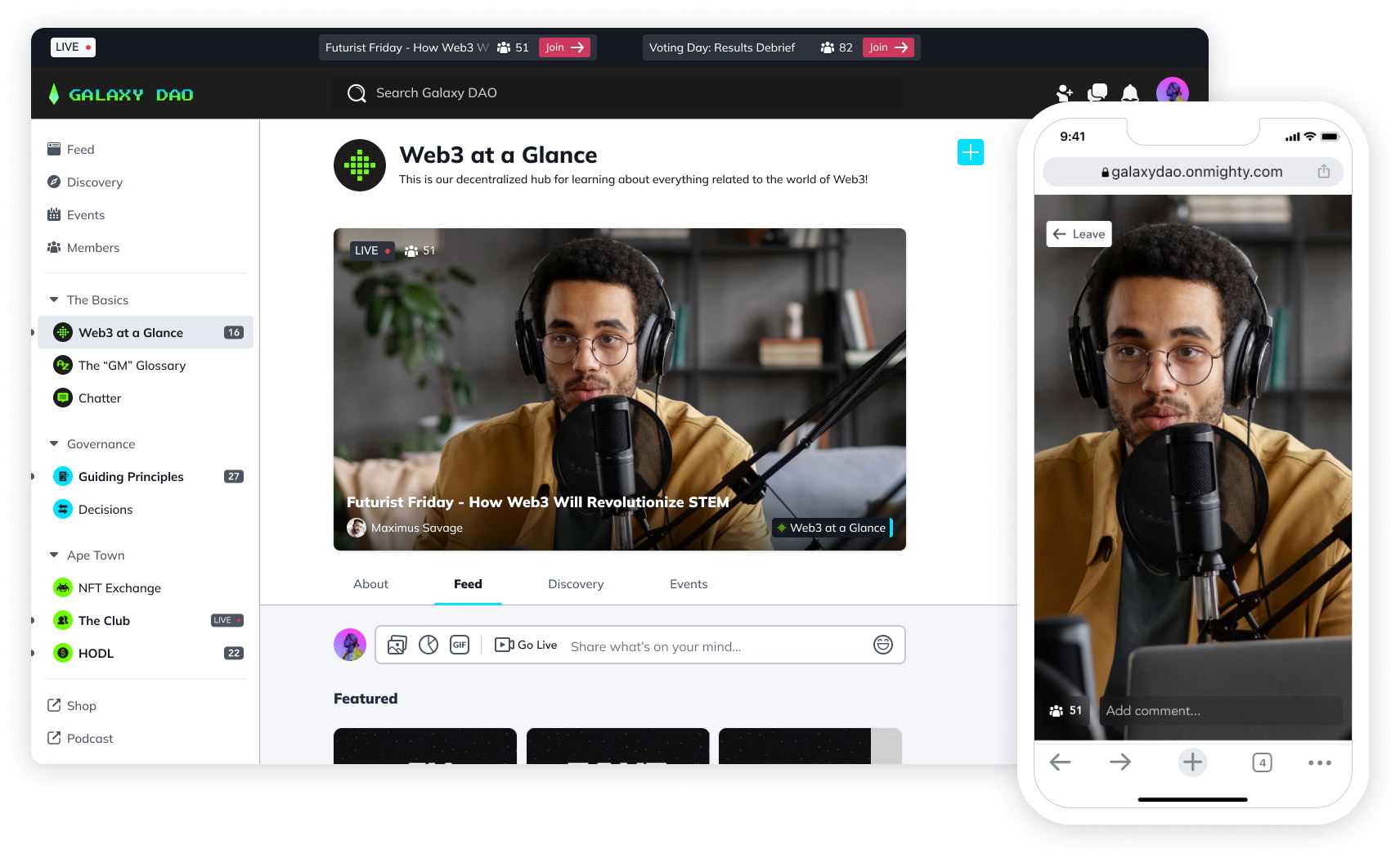 It gives you an amazing, brandable, and PRIVATE community space for your members, and you can post every type of media, live stream, host integrated events, teach a course, and charge for admission if you want.

How to Measure Community Engagement

How to Measure Community Engagement

Considering Geneva Chat? We’re exploring if they are worth your time, or if you should choose a different community platform.

If you're thinking about joining or starting an online community, but wondering why you should, we'll tell you!

How to Start a Community From Scratch in 2023

It's surprisingly easy to create a community that thrives on Mighty. Let us show you how.

How to Start a Community From Scratch in 2023

The 6 Best Discord Alternatives for 2023

Discord is ideal for gaming communities. But is it really the best platform for other ventures? Let’s look at your options.

The 6 Best Discord Alternatives for 2023

If you're thinking about trying Circle.so, or already use it and are ready for a change, here are 7 of the best alternatives + the pros and cons of each one.

How to Evaluate Community Platforms

Finding the community platform that is right for you can be challenging. We’ve got a guide to make your search easier.

How to Evaluate Community Platforms

Managing online communities can be a challenge when you’re starting out. Here are some tips to make your work easier.

11 Types of Online Communities That Thrive

Stuck on what type of online community to build? Here are 11 ideas to get you started!

11 Types of Online Communities That Thrive

The Best Tribe Alternatives in 2023

If you’re looking for an alternative to Tribe, we’ve got some suggestions to make your search easier.

The Best Tribe Alternatives in 2023

The 8 Best Alternatives to Substack for 2023

Substack is a popular newsletter platform. But that doesn’t mean it’s the best. We’ve got suggestions for platforms that will help your brand grow to new heights.

The 8 Best Alternatives to Substack for 2023

Searching for a place to host your community online? We’ve got some options for you.

Slack vs Discord: The Best Pick for Communities

If you’ve been looking for a place to host your online community, we’re comparing two industry juggernauts to see which one is right for you.

Slack vs Discord: The Best Pick for Communities

Are you looking for a place to host your online community? We’re comparing two heavy-hitters to see which is right for you.

The 6 Best Slack Alternatives for a Thriving Community (2023)

The 6 Best Slack Alternatives for a Thriving Community (2023)

Which is better for running your coaching business? We’ll give you a side-by-side comparison of what each option gives you.