If you're thinking about trying Circle.so, or already use it and are ready for a change, here are 7 of the best alternatives + the pros and cons of each one.

If you’re trying to build an online community, you might have come across Circle.so. It was launched by three former Teachable employees who wanted to create a product to host online communities to supplement Teachable courses. The Circle platform lets you build a community with forums, subgroups, and events.

If you’ve been thinking about trying Circle or are currently using it and have outgrown it, this post will talk through 7 alternatives to Circle.so and walk you through some pros and cons of each one.

Mighty Networks is an all-in-one, white-label community platform and online course builder. You can use it to host events, build a thriving community, livestream to your members, and so much more—all under your own brand and domain name. 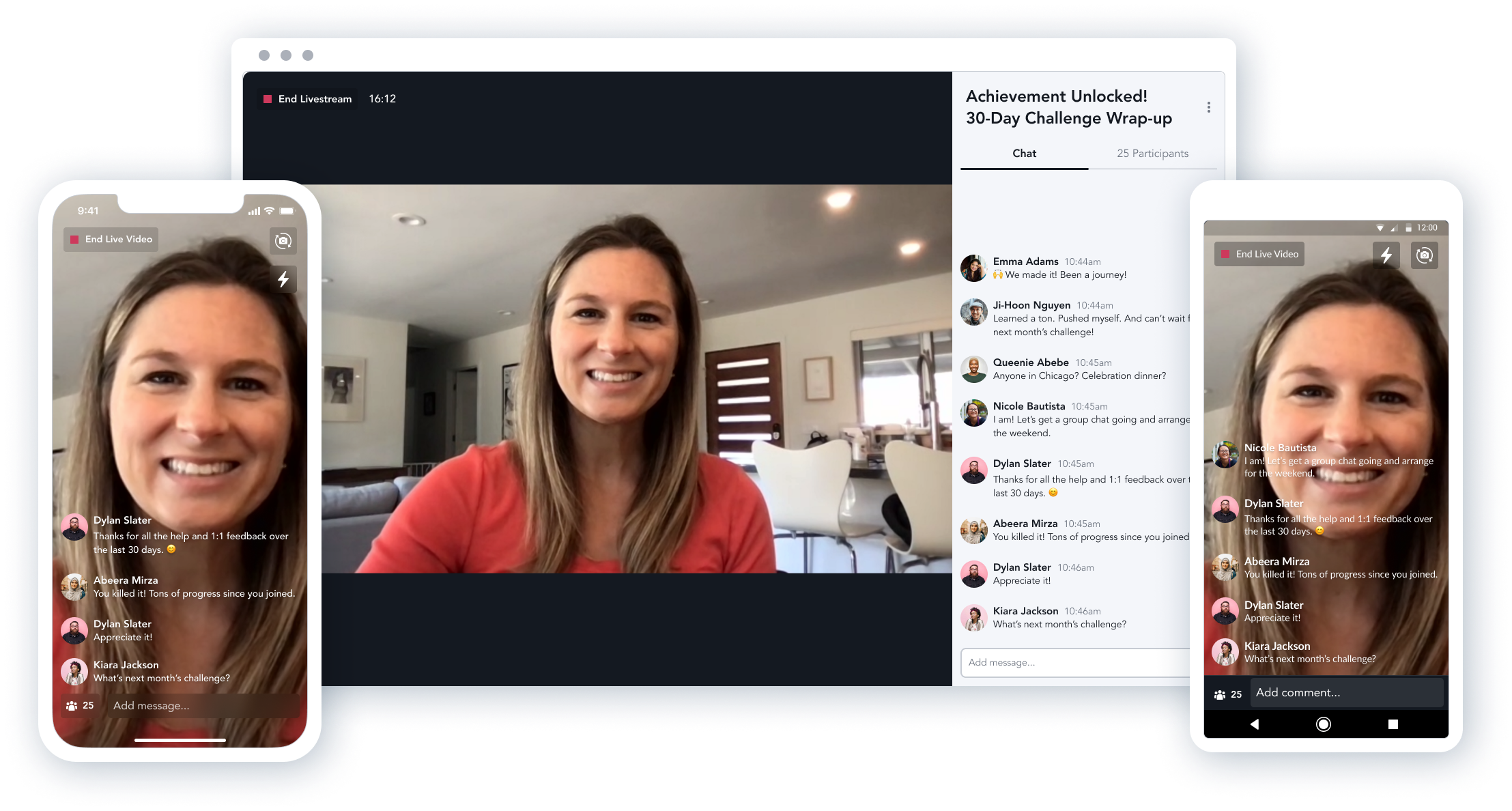 Mighty Networks also has a bunch of ways to monetize your community, letting you create membership plans for the community itself, subgroups, or for courses. Unlike Circle, you can charge for membership in currencies other than USD. Members can also access your Mighty Network online or via an iOS or Android app (Circle only has iOS).

For roughly the same price as Circle.so, Mighty Networks gives you all the same features and more. To sell courses with Circle, you would need to pay $29-$249 extra for an additional service like Teachable. With Mighty Networks, course capability is built in. The ability to livestream to your members is also a huge perk of Mighty Networks that Circle doesn’t have. 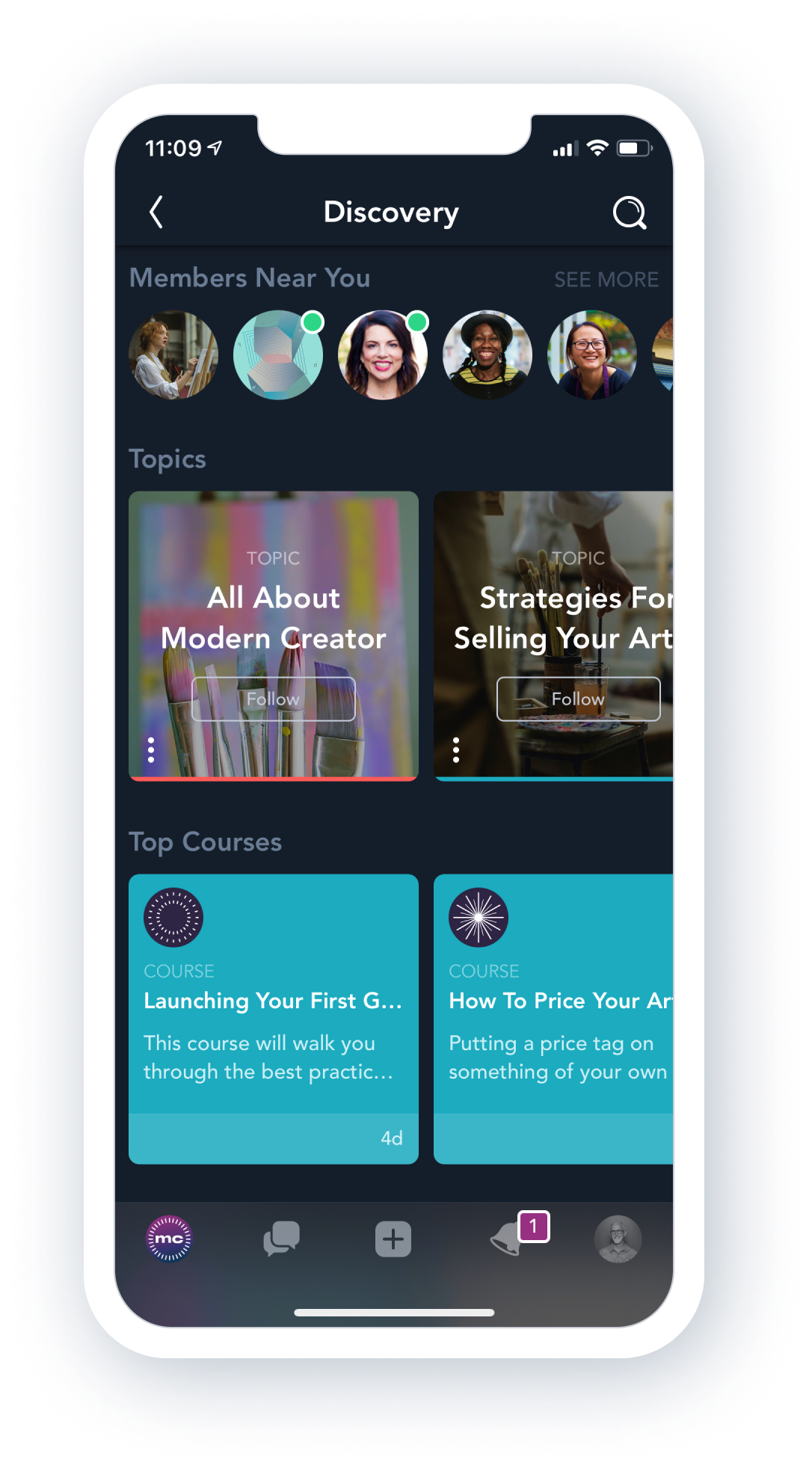 Since you get all the same features and a ton more for the same cost or less, Mighty Networks is an amazing alternative to Circle.so. (If you want to go deeper, we have a full side-by-side comparison of Mighty Networks vs. Circle.)

Here's a comparison of the basic plan features from Circle and Mighty Networks. 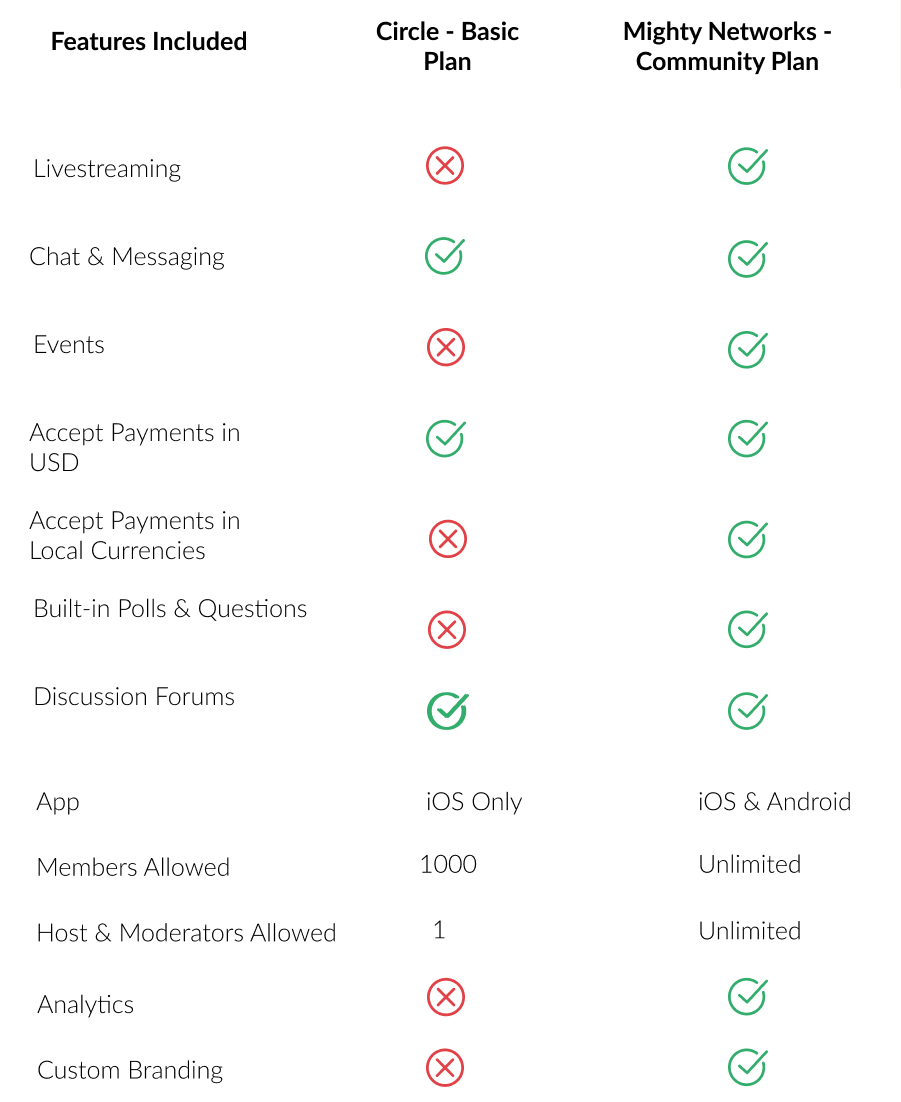 Slack is another alternative to Circle.so. With Slack, you can create specific channels for dedicated conversations, which replicates one of the main features of Circle.

Slack is common, and a ton of companies use it. So, there’s a good chance some of your members will know Slack already.

Slack also has a dedicated app that works well and is available across all devices (unlike Circle.so).

reddit is a popular social network that is dedicated to discussions, and millions of people are already there. Like Circle.so, reddit allows users to create “communities”—formerly known as “subreddits.”

Functionally, a reddit community has many of the same features as Circle.so, including an interactive discussion forum. Users can create posts, comment, and get notifications. They can also upvote their favorite posts or comments.

One major drawback of reddit is that you need to have been a user for a while with enough “karma” to get approved to start a community. This means that, if you create a reddit account today in the hopes of starting a community there, you’d need to wait for at least a month and work hard at engaging with other posts before you even have a chance of starting a community—and it’s no guarantee. Plus, you’re bound by a set of rules created by reddit, so you don’t have a lot of freedom to just build whatever you want.

Just as Circle.so was created to complement Teachable courses, Kajabi is another course product that has a separate community option—Kajabi Community. Kajabi Community is a product you create within the Kajabi Dashboard, and it gives you a basic forum function that can be divided into topics.

While it gives you access to your members and lets you start conversations, the Kajabi Community option has fairly limited functionality. However, like Circle.so it lets you create a simple discussion forum to supplement your products.

Another alternative to Circle.so is Discourse. Discourse lets you create a simple discussion board and organize conversations. It also has basic engagement tools that you can use to respond or react to posts.

Discourse can be expensive, plans on the website start from $100/mo. Although the code itself is marketed as “free,” and you could theoretically use it to build a community, you need to pay for hosting somewhere. You would also need coding knowledge to set up the free code from Github if you chose that route. In fact, you might even have to hire a developer to help you set it up. It’s definitely not a simple option. This means that Discourse will either be expensive or extremely complicated.

A Facebook group is a well-known and free alternative to Circle.so, and works to connect people. People with existing Facebook accounts can join in and take part in a conversation.

While you’d think that Facebook would be a solid alternative to a product like Circle.so, it’s actually a terrible place to host a community.

Engagement is limited. Features are limited.

You’ve probably joined Facebook groups that had thousands of members and never thought about it again. Facebook often won’t notify you when there’s activity in the group. And the fact that the group may be free to join—unless it’s monetized through another platform—probably means that people don’t actually care about taking part.

Add to this the way that Facebook is making money off of your community—by collecting and selling your users’ data—and you’ve got a recipe for a group that probably won’t go very far. As more and more people boycott Facebook, you don’t want to start a community on a platform that potential members will refuse to use.

Discord is another popular team chat platform. It’s similar to Slack in that it creates a text-based communication solution that helps community members have conversations. Also, like Slack, Discord allows you to create dedicated channels for discussion topics. It also has easy options for voice chatting since it was created for gamers to collaborate.

As an alternative to Circle.so, Discord is comparable to Slack. It’s a good option to create channels for discussions and has the added bonus of easy live calling between members—which could be helpful in some situations. But it’s not really a good platform to build an engaged community on, and doesn’t have nearly the capability of an alternative like Mighty Networks.

There are a lot of great options on this list. But none of them do what Mighty Networks does, allowing you to create a vibrant community, host discussions, sell memberships, go live, build dedicated subgroups, and create elegant courses. All for a price that’s cheaper than many of these other options.

In fact, here’s what you’d have to pay to get these features elsewhere: 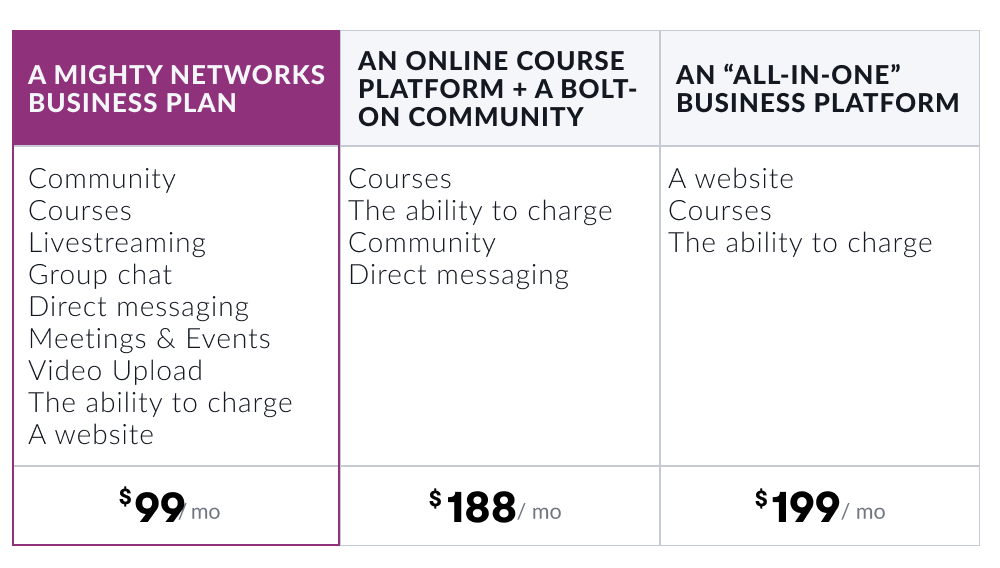 Yup, we’re super proud of what we’ve built and we care deeply about helping you build a powerful community that your members will love.

Cultural software takes you beyond courses and community and gives you the power to start a movement.

If you’ve been looking for a place to host your online community, we’re diving deep into two options.

If you’re thinking of creating an online community and wondering which platform is right for you, we’re comparing two of the most popular options.

If you’re looking for the right software to bring people together, let’s compare these two options

If you’re trying to figure out the place to create and host your online community, we compare these two options to help you decide.

If you’re ready to get your community talking, these apps will help!

If you're considering which of these two is right for you, let's compare.

If you're wondering what it is and how to make it work, we'll tell you how.

Growing an online community is like any other business: data informs good decisions. We’re diving into why community analytics are important.

If you’re looking for an online home for your community, here’s how to pick the right one.

These two community platforms boast member management software and white-label apps. Which is a better option?

The right community platform can help your brand or business take off. We’ll introduce and rank 9 of the best.

If you’re launching a new community, use the process of Community Design™ to help it thrive!

If you're looking to get your community engaged, these ideas will help you grow.

If you’re thinking about launching a community, let's talk about the right place to host it.

If you need software to build a private community, these options have you covered.

If you're looking for a home for your community, these 5 Higher Logic alternatives will get you started!