Twitter was created in 2006, and in the decades that followed the little bird tweeted its way into the hearts and minds of 400 million users. Twitter was made up of famously short, text-based content composed in “tweets.” Long-time users of the platform will remember the kerfuffle when tweets expanded from their original 140-character limit to 280 and the brief outrage that followed.

With Elon Musk’s +$40 billion Twitter acquisition in October 2022, a lot of people have been fleeing the platform. Some object to Musk himself, whether it’s his political views or his leadership style. And some people just aren’t buying into his vision for the platform.

One of the Twitter alternatives that’s been making waves lately is Mastodon. Created in 2016 as an open-source, decentralized social forum, Mastodon touts (or we should say “toots”) itself as the better option for long-time Twitter users. With celebrities like Kathy Griffin and Stephen Fry making the switch, you might be wondering if it’s time for you to try it too.

In this article, we’ll talk about Twitter vs. Mastodon, showing how the wooly mammoth compares to the little blue bird, and we’ll introduce a better option.

Mastodon is a decentralized social network that’s hosted on what users refer to the “fediverse” – that basically means that the network lives on independent servers that can talk to each other. This gives it a bit of a local-to-social network feel. Created in 2016 by Eugen Rochko, Mastodon feels a bit like independent social networks that all speak the same language.

But, if the individual server part of Mastodon freaks you out, let’s say this. Once you get past the individual hosting (ie. where your information lives), the user experience is ridiculously similar to Twitter, maybe with a bit of Discord thrown in. Instead of a “tweet” you “toot.” Instead of “liking,” you “favorite” something. Long-time users of Twitter will probably recognize Mastodon as a sort of generic brand Twitter – although with 500 characters. 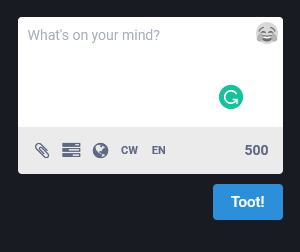 Mastodon lets you create an account, where you can add a profile pic, a link to your website, or other features that people put in their Twitter Bio. Like Twitter, you get a head count of your followers and the people you’re following. You can reply, boost (AKA “retweet”), star (favorite) something, or bookmark toots. 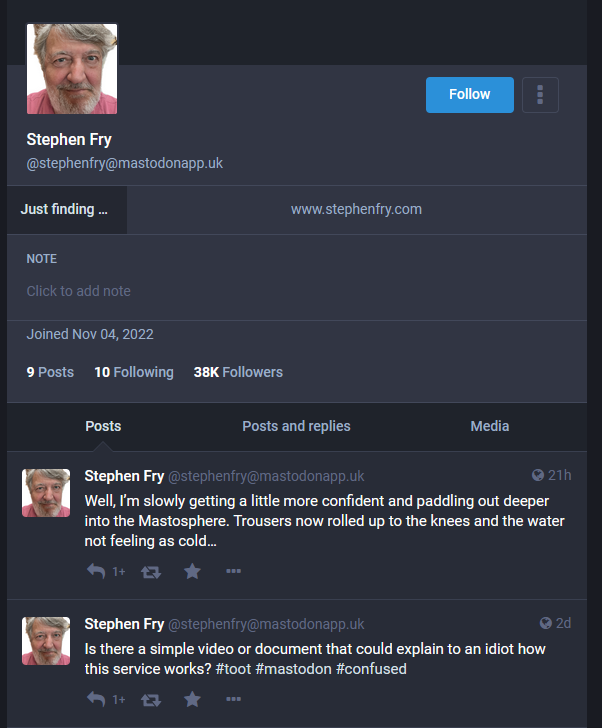 Pros and cons of Mastodon

As a Twitter alternative, Mastodon does a lot of the same things. But it’s harder to use, requires self-hosting if you want to create a server, and frankly, is missing a lot of the good features Twitter has. It’s easy to dismiss an algorithm, but on a traditional social network, the algorithm helps you see content that you want to see. When your feed is a never-ending and unorganized brain dump, it makes it tough to have conversations and grow community. We could think of Mastodon as a forum instead, but it doesn’t work as well as something like reddit, which has up-voting and down-voting to make sure people are seeing relevant material.

So let’s talk about an alternative.

Mighty Networks is a cultural software platform that works to build vibrant communities. But where Twitter is a massive social network and Mastodon is a huge collection of servers, Mighty lets you build a dedicated community full of members who share similar visions and goals.

Here are a few reasons to build a Mighty Network instead.

Where Mastodon requires coding and hosting to be able to set up your own server, Mighty Networks gives you a powerful community right out of the box. Anyone can easily create, grow, and even monetize a beautiful community that blows both Twitter and Mastodon out of the water.

280 characters? 500? Who cares? A Mighty Network gives you ACTUAL content features. Create posts if you want, or create full-length articles (blog posts). You can create polls and discussions, organize discussions, live stream, add events, and build courses. Mighty is a platform designed to make community work and to bring a group of strangers together and help them become life-long friends. 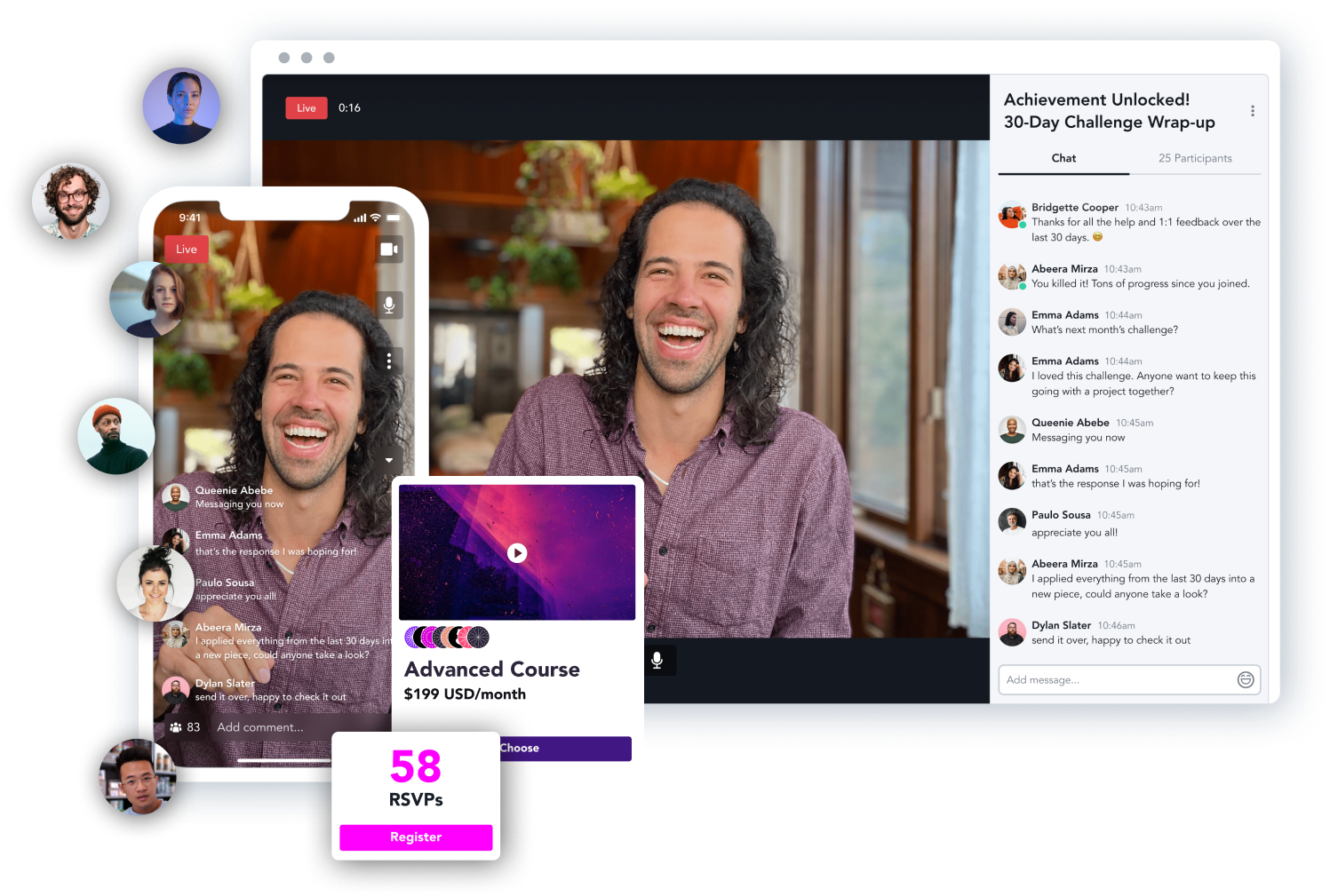 Unlike Mastodon, where users live on servers but can reach across the platform, a Mighty Network is an enclosed community. Instead of having to join different servers, discussions and activities can be organized by Spaces instead. Each Space gives you the option to sell access, host events, add content, all-member chat, or even try live streaming and courses. 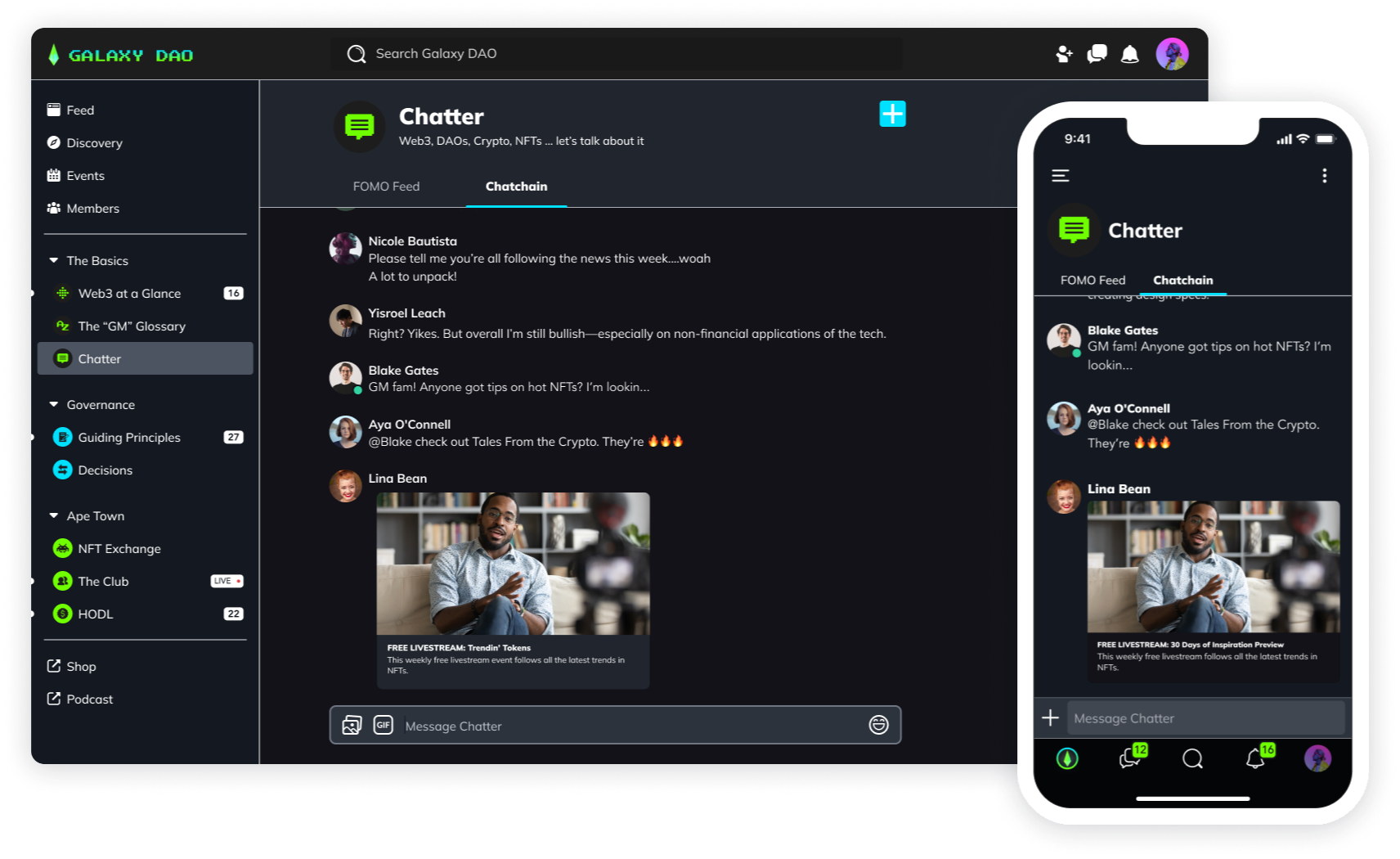 If you’ve gone to the work of building a community and you want to monetize it, there’s nothing wrong with that. So instead of worrying about whether your platform has ads or not - like Mastodon does – why not just build on a platform that lets you turn community into a thriving business?

Mighty has payments built-in, making it easy to charge members either a one-time or monthly fee for access (or keep it free if you prefer). Or, some Hosts monetize free communities with paid live events, charging for access to premium Spaces, or selling a course. The sky is the limit, and you can’t do any of this on either Twitter or Mastodon.

A Mighty Network gives you way more options for safety and moderation. It has the same possibilities as Mastodon for getting users to request access or apply to join. You can moderate content and enlist other hosts as moderators. And since users belong to a community instead of the whole platform, you can be comfortable in the privacy of your own Network. 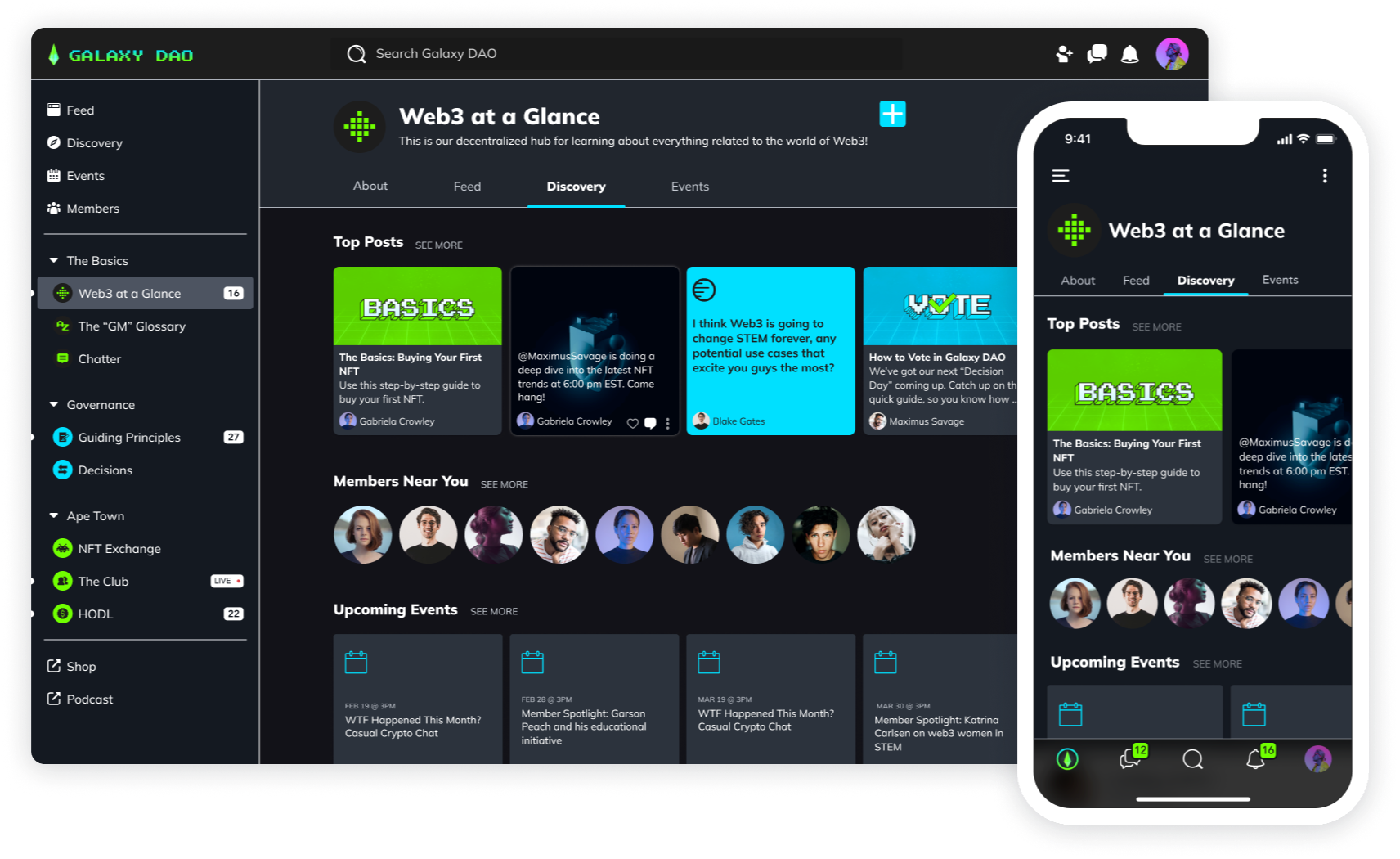 Mighty Networks comes with a great app for all devices. But with Mighty Pro, you can also get a custom-built, branded app that gives you a Mighty Network completely under your own brand. We do the building and offer ongoing support. Schedule a call with us to learn more. 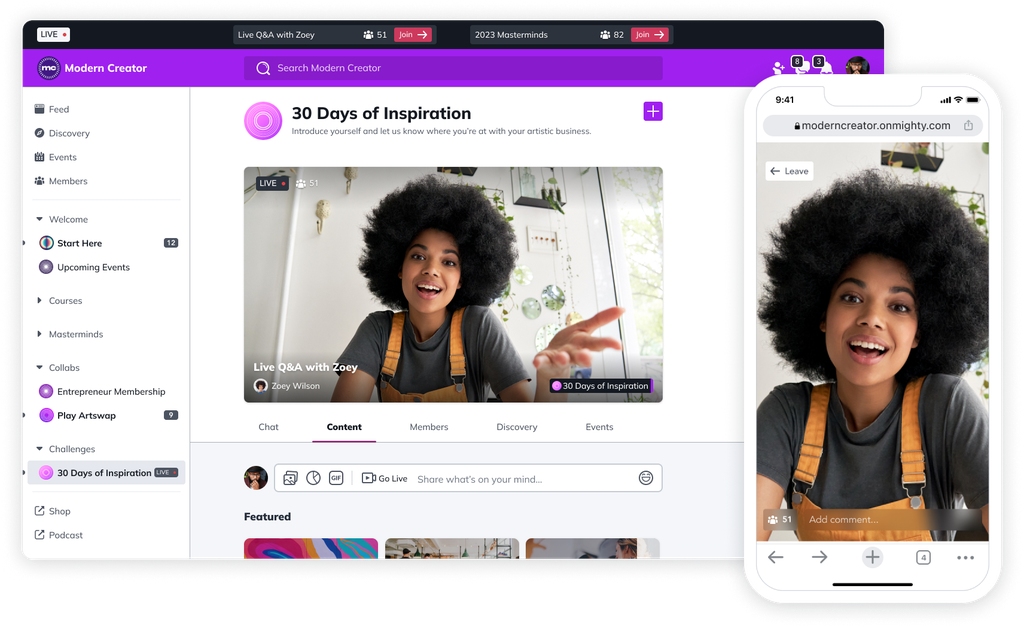 If you’re looking for a better alternative to both Twitter and Mastodon, the software review site G2 ranks Mighty Networks as the #1 community platform. With Mighty, you get a powerful community engine to bring people together for great conversations. But add in the features like events, courses, and monetization, and you’ve got the tools to build your own powerful social network.

Why not give it a try? It’s free for 14 days, and we won’t ask for your credit card. You could have your own social network up and running in the next 20 minutes, no coding required.

Cultural software takes you beyond courses and community and gives you the power to start a movement.

If you’ve been looking for a place to host your online community, we’re diving deep into two options.

If you’re thinking of creating an online community and wondering which platform is right for you, we’re comparing two of the most popular options.

If you’re looking for the right software to bring people together, let’s compare these two options

If you’re trying to figure out the place to create and host your online community, we compare these two options to help you decide.

If you’re ready to get your community talking, these apps will help!

If you're considering which of these two is right for you, let's compare.

If you're wondering what it is and how to make it work, we'll tell you how.

Growing an online community is like any other business: data informs good decisions. We’re diving into why community analytics are important.

If you’re looking for an online home for your community, here’s how to pick the right one.

These two community platforms boast member management software and white-label apps. Which is a better option?

The right community platform can help your brand or business take off. We’ll introduce and rank 9 of the best.

If you’re launching a new community, use the process of Community Design™ to help it thrive!

If you're looking to get your community engaged, these ideas will help you grow.

If you’re thinking about launching a community, let's talk about the right place to host it.

If you need software to build a private community, these options have you covered.

If you're looking for a home for your community, these 5 Higher Logic alternatives will get you started!